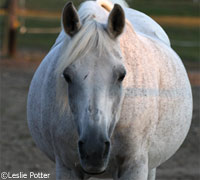 It’s well-known that obesity rates in humans are alarmingly high in the western world. In the United States, nearly two-thirds of adults are obese or overweight. In England, the rate is more than 50 percent and projected to continue to rise. New research shows that the obesity epidemic might be affecting horses, too.

A study conducted at the University of Nottingham in England and published in the journal Veterinary Record found that one in five horses is overweight or obese. The horses used for the study were identified as animals used exclusively for leisure rather than competition, riding lessons or breeding. Half of the horses in the study ate grass as their main source of forage, and 90% were fed some type of concentrate.

The study was conducted by sending questionnaires to 500 owners of leisure horses. They were asked to score their horses’ weights on a scale of zero to five, with a score of more than three indicating overweight. The University researchers then assessed the weight of a random sampling of horses used in the study. They found that the owners had underestimated the weight of their horses, leading the researchers to conclude that the obesity rate is even higher than the initial questionnaires suggest. They estimate that the rate of overweight or obese horses is approximately 54 percent.

Traditionally, many horse owners prefer to see their horses carry a bit of extra weight rather than being slightly underweight, but just like humans, horses are more prone to health problems when they are overweight. Fat horses are at higher risk for potentially serious health problems including arthritis, laminitis and equine metabolic syndrome. Excess weight puts stress on the bones, joints and hooves, especially when coupled with poor fitness and muscling.

Click here to view an instructional video on how to assess your horse’s body condition.

Click here to read about optimizing your horse’s diet to maintain a healthy weight.