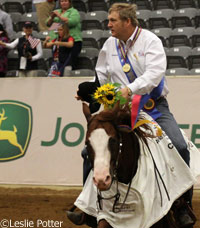 In a year that equestrian sport was forever changed in the United States, an all-American horseman was honored for his golden achievement. For the second consecutive year, the voters for USEF Horse and Equestrian of the Year have crowned a horse and his rider as champions in both categories.

Tom McCutcheon, the only American double Gold medalist at the Alltech FEI World Equestrian Games had barely finished celebrating the achievements of Gunners Special Nite as 2010 Farnam/Platform USEF Horse of the Year on Friday evening at the USEF Annual Meeting, when he would find himself on stage again, this time picking up an honor all his own.

McCutcheon wrote his place in history, becoming the first reiner to be crowned USEF Equestrian of the Year.

For McCutcheon, this honor isn’t about one day or one horse show, it is about the daily pursuit of excellence. A culmination of a lifetime of work paid off in the Alltech Arena during the first week of the WEG. After a year of disappointing results, McCutcheon knew it would take a really special horse to turn his luck around. He found some inspiration in wife Mandy McCutcheon, found the horse in Gunners Special Nite in April, he found an owner in Sarah Willeman and he found the revival of his career in 2010.

So it was fitting that 2010 was the year that the three-time World Equestrian Games Team Gold medalist took the highest honor.

“This whole thing has changed my life,” said McCutcheon of the last 12 months.

An NRHA $1 million rider, the 2010 Adequan/USEF Open Reining Reserve Champion and the Kentucky Cup winner, McCutcheon continued his pursuit of excellence on the national level and the international stage.

Although McCutcheon reaped the year’s highest honor, there were plenty of other winners to celebrate at the Pegasus Awards celebration. McCutcheon earned his nomination for Equestrian of the Year by picking up the Becky Grand Hart Trophy, given annually to an athlete in a non-Olympic FEI discipline. McCutcheon set a new standard by winning this award for the sport of reining, another first.

The race for Equestrian of the Year was painstakingly close and McCutcheon’s golden achievement stood up against some very tough competition. The seven other Equestrians of Honor are:

McLain Ward (Brewster, NY)
Ward won the William C. Steinkraus Award for his achievements in an Olympic discipline. Ward – the top show jumping rider in the United States was nearly invincible with superstar mare Sapphire in 2010, picking up wins on both sides of the ocean and across the United States. He was also a champion of sportsmanship and demonstrated dignity and class in the face of adversity.

Nadine Tilley (Los Angeles, CA)
Tilley won the Bill Robinson Trophy for a year of excellence in a career that has spanned four decades. The Bill Robinson Trophy is presented annually to a driver competing in non-international competitions. Tilley earned four national titles in the 2010 IALHA Nationals, she won at nearly every turn in 2010, with a variety of horses under her expertise.

Hunt Tosh (Alpharetta, GA)
Tosh was honored with the Emerson Burr Trophy for his achievements in the hunter ring in 2010. Like McCutcheon, the horse with which he picked up a majority of his accolades was also honored, and Lone Star was nearly undefeated in 2010. He dominated the Working Hunter Division winning from Harrisburg to Ocala and Tosh even had a day in his hometown of Milton, GA named in his honor. Hunt Tosh Day is December 6.

Merrill Murray (Versailles, KY)
Murray was honored with the C.J. “June” Cronan Trophy, which is presented to the horseman excelling in under saddle show breeds. Murray is one of only five riders to win the American Saddlebred’s Five-Gaited World’s Grand Championship title aboard three different horses and he repeated his 2009 Championship in 2010 with Courageous Lord. He had two different Champion Five-Gaited horses at six different shows.

Daryl Hopson (Walla Walla, WA)
The Barbara Worth Oakford Trophy annually honors the competitor in a non-Reining Western discipline. In 2010, for his work with Morgans, the choice was clear. Hopson was virtually unbeatable, winning from Washington State to New England and from California to Oklahoma City. He had four different horses win Grand National and World Championship honors.

Michael Byatt (New Ulm, TX)
The Norman K. Dunn Trophy is presented to an equestrian showing a horse in hand or at halter. Byatt has won accolades worldwide throughout his career and he won top titles showing Arabians at three major shows in the United States in addition to international wins at Aachen, Menton, Sharjah and Paris.

Lauren La Vine (Burbank, CA)
The Vaughan Smith Trophy is presented annually to the best rider of any horse or pony breed shown in hunter pleasure, show hack, hunter hack, dressage hack, costume, side saddle or Western dressage and in 2010 La Vine was in a class of her own with her part-bred Friesians and Half-Andalusians. She was undefeated at the 2010 International Friesian Show Horse Association (IFSHA) World and Grand Nationals Horse Show wining eight World Championship titles and six National Championships along the way.

Lifetime Achievement Award
Don Harris (Cox’s Creek, KY) deservedly joined the company of legends when he was bestowed with the USEF Lifetime Achievement Award and the Jimmy A. Williams Trophy for his place history in the American Saddlebred industry. Harris spent his life as an ambassador, advocate and champion of one of few breeds native to the United States. The American Saddlebred has been defined by his influence and scores of horses have defined their breed thanks to his training and dedication to this breed.

“I’ve had such a life,” said Harris. “Sometimes I can’t believe it. It takes lots of things to get to a place like this.”

To a rousing ovation in the heart of Saddlebred country, Harris accepted his award from USEF President David O’Connor.

“This is the greatest night I’ve ever had,” said Harris, whose wife Judy was also honored with a Pegasus Medal of Honor.

Junior Equestrian of the Year
Endurance rider Kelsey Kimbler’s achievements were two-fold in 2010; not only was she crowned Junior Equestrian of the Year, she was also the recipient of the 2010 USEF Youth Sportsman’s Award, sponsored by Breyer Animal Creations. Kimbler, a 17-year-old high school senior has won the AERC Junior National Hundred Mile Award twice since the award was established in 2007. Kimbler is the only junior to complete five 100-mile rides in one year. She represented the AHA Youth Association as her region’s delegate and is involved in 4-H events with her Arabians. She was nominated for this award by both the Arabian Horse Association (AHA) and the American Endurance Ride Conference (AERC). Kimbler’s sister, Kirsten, won this award in 2007.

“I’d like to thank the horses I’ve ridden,” said Kimbler. “They do so much for us. Every time we put a saddle on them they give us 110 percent.”

Other awards throughout the evening were bestowed to some of the most influential people in equestrian sport. O’Connor awarded three Pegasus Medals of Honor; Judy Harris and Jane Ebelhare were on hand to accept theirs. Rebecca Broussard passed away in December, but her recognition for lifetime of service to equestrian sport, particularly the growth of eventing west of the Mississippi, was accepted by her daughter Sarah Kelley and her husband, Jerome Broussard.

The McDevitt Award of Merit is awarded posthumously to people who have passed away during the preceding competition year. Walter Staley Jr., William Munford and Charlie Weaver were honored for their places in history.

The Sportsmanship Award and Walter B Devereux Trophy was awarded to Mary Anne Cronan, whose commitment to the sport runs deep. Her service to the USEF, specifically to the Saddlebred industry, has established her as a living legend.

The Sallie Busch Wheeler Trophy is given, at the discretion of USEF President David O’Connor, to honor distinguished service in equestrian sport. In 2010, the Kentucky Horse Park was recognized for welcoming the horse world to the Horse Capital of the World and putting on a show that no one will ever forget when the Alltech FEI World Equestrian Games ran through the bluegrass for 16 days last fall.

The USEF Equus Foundation Humanitarian Award was given to Bob Cacchione who developed the IHSA collegiate riding program.

Don Burt and Bill Munford were added to the Honor Roll of Distinguished Officials.

Cecilia Butler-Stasiuk was recognized for her outstanding achievement in the sport of endurance and Joanne Terry was awarded the Marty Simensen Memorial trophy for her work with rescue horses.

Roxann Hart was recognized for her outstanding commitment to breeding Arabians with the Ellen Scripps Davis Memorial Trohpy.

For the first time in history, the 2010 Pegasus Awards Gala was broadcast live on USEFNetwork.com. Visit USEFNetwork.com for video on demand from Saturday evening’s event. 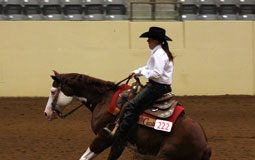 Weighing the Risks of Joint Injections