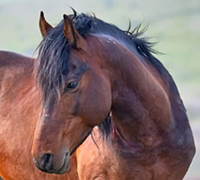 Madeleine Pickens’ plan to create a wild horse sanctuary in Nevada doesn’t save American taxpayers money, and doesn’t include sufficient water and grazing for the horses. This is according to a statement released by Bureau of Land Management (BLM) director Bob Abbey to the Associated Press on January 21, in which he announced that the BLM would not accept the proposal in its current form.

Pickens’ proposal outlines a plan for an initial herd of 1,000 wild horses to be housed on approximately 500,000 acres in Nevada. A nonprofit foundation would be charged with care of the animals in the sanctuary, and the government would pay the foundation $500 annually for each horse. According to Abbey, the current cost to the BLM for horses in long-term holding is $475.

Pickens has already purchased the acreage for her proposed sanctuary in Nevada. She has named the land the Mustang Monument preserve.

The BLM and Pickens have met and discussed her proposal, which she has amended and changed to work toward BLM requirements since she first presented it in 2008. Her current plan was outlined as a pilot program which she hopes to expand by purchasing additional land to house more horses.

“Mr. Abbey’s suggestion that the area lacks enough water or forage to support wild horses is also perplexing,” Pickens wrote on her website, MadeleinePickens.com. “The target number of 1,000 horses is consistent with the number of cattle the BLM has consistently authorized on the public lands portions of the ranches I purchased.”

The BLM still intends to work toward partnerships with private land owners to provide grazing areas where American Mustangs can live in a relatively natural state, according to Abbey. “However, despite numerous requests from the BLM, (her) foundation has not provided a formal and detailed proposal so that the BLM can properly analyze and determine its feasibility,” Abbey told the AP.