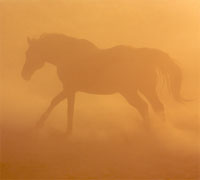 2011 has already brought controversy in the horse world with several legislative items related to horses emerging at the state level.

Nebraska State Senator Tyson Larson wants to bring horse slaughter to his home state. In January, the newly-elected Republican introduced LB 305, a bill that would create a state meat inspection agency to allow processing and export of horse meat.

According to his website, Sen. Larson comes from a horse farming heritage, and his bill reflects an opinion that has become common among horse ranchers in western states: that horse owners and breeders need slaughter as a disposal option for unwanted horses. However, the vast majority of Americans—approximately 70%, according to a 2009 Public Opinion Strategies poll—oppose horse slaughter.

A related bill introduced by Sen. Larson, LB 306, would require rescue facilities to accept any horse brought to them by individuals or law enforcement without exception, regardless of whether or not they have the resources to care for the animal. Rescues would face a fine for every animal turned away. Although the bill places an extra burden on horse rescue operation, it offers no opportunity for government funding of those rescues. According to Larson’s website, he believes the bill would contribute to “fostering a culture of humane treatment for animals.”

Valerie Hinderlider, president of a Nebraska rescue called Break Heart Ranch, was quoted in The Grand Island Independent as saying, “There’s a reason behind trying to make [horse rescues] the fall guys, to take us under and then say, ‘there’s nothing to do with the horses,’ and so slaughter would be the only option.”

“Basically, [L.B. 306] would mandate that humane societies and horse rescue operations would have to accept a horse if one was presented to them, or they would face a class four misdemeanor,” said Larson. “I’m giving them an alternative. If they don’t want us to process horses, what are we supposed to do?”

Nebraska residents can contact their state legislators to weigh in on these bills. Visit NebraskaLegislature.gov to find your senator.

Meanwhile, Virginia is considering S.B. 1026, which is meant to outline the standards of care specifically for “agricultural animals that ensure accommodation for customary farming activities.” The bill amends the Code of Virginia to specify that owners of agricultural animals must provide “Feed to prevent emaciation” and “Water to prevent dehydration.”

Critics of the bill, which include many animal welfare organizations, say that this weakens Virginia’s existing animal protections by putting the standard of care down to the bare minimum. Supporters of the bill say that it prevents frivolous claims of cruelty and neglect by allowing for situations where a horse would not have access to feed or water, such as while being trailered.

The bill has passed the Virginia House of Delegates. Read the full text here.

Virginia residents can find their senators’ contact info at legis.state.va.us

Finally, Oregon horse owner Lindy Minton proposed a bill that would require any horses in the state for more than 30 days to have an “equine ownership certificate.” The bill has been effectively killed for the current session, but could re-emerge in the future. As written, the bill would require horse owners to have a certificate for each of their horses at a cost of no more than $100. It also outlines requirements for humane horse transportation, including requirements for trailer size as it relates to the horses in transport and mandatory rest times for long trips. Finally, the state of Oregon would be charged with keeping a registry of horse rescues, and rescue organizations would have to register with the state.

Minten stated that her goal was to help rescue organizations by weeding out the horse dealers posing as rescues. She also expressed that her bill was a working draft and she hoped that horse owners and rescuers would provide input to make it better. However, her bill was not well-received in the horse community and is not scheduled for discussion in the legislature.

Read the full text of the bill here.