German rider Matthias Alexander Rath earned the envy of dressage riders worldwide when he was named the new rider for the record-breaking stallion Totilas late last year. The new horse-and-rider team made their first public appearance this month at the Schöckemohle stallion show in Vechta, Germany.

Rath is an accomplished dressage rider at the young age of 26 and was part of the bronze-medal winning German team at the 2010 Alltech FEI World Equestrian Games. Totilas won three gold medals at WEG with his Dutch rider, Edward Gal, but was sold unexpectedly to German breeder Paul Schöckemohle shortly after.

According to British magazine Horse and Hound, Rath and Totilas are scheduled to make their competitive debut this May with an eye on qualifying for the European Dressage Championships in The Netherlands in August. 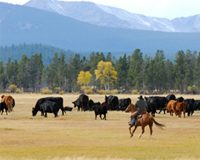