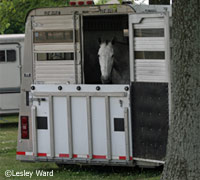 Six Thoroughbred racehorses were killed Friday when the commercial trailer they were riding in caught fire. Firefighters responding on the scene found that the fire was likely caused by a lit cigarette tossed out the window of another vehicle. The cigarette ignited the hay in the trailer and the fire spread quickly.

The young horses were on their way to Belmont Park in New York where they were to begin race training. The incident occurred on I-95 in North Carolina. The road was closed for about 45 minutes after the fire occurred.

The driver of the trailer pulled over when she saw smoke on the trailer’s onboard camera. She and the backup driver tried to extinguish the flames and unload the horses, but they were unsuccessful. One of the drivers sustained minor injuries during the rescue attempt. Firefighters responded to the fire, but the trailer was already engulfed in flames by the time they arrived.

Over the Fence: A Young Endurance Champ