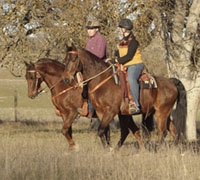 The popular helmet awareness campaign Riders4Helmets has partnered with generous sponsors to offer the largest ever giveaway of riding helmets with a combined value of over $6,500, in addition to a highly sought after iPad2. Visitors to the Rolex KY 3DE (April 28-May 1) may visit the Riders4Helmets area at the trade show in the covered arena to register for the giveaway, receive helmet safety literature, and, have the opportunity to participate in helmet fitting demonstrations (times available online). Equestrians who are unable to attend Rolex may register for the giveaway by visiting www.riders4helmets.com (see giveaway tab on website). The giveaway closes midnight on May 1st, 2011.

Riders4Helmets horse and rider logo wear will also be available for purchase at Rolex, the proceeds of which will be used to fund educational events such as helmet safety symposiums. The logo wear collection is sold exclusively online by EquestrianCollections.com who are donating 100% of all proceeds from sales of logo wear to the Riders4Helmets campaign, in support of their efforts to increase the use of helmets by the world-wide community of equestrians.

Riders4Helmets was founded in early 2010 after Olympic dressage rider Courtney King Dye was seriously injured in a riding accident. King Dye, who remained in a coma for a month following her accident, was not wearing a helmet at the time of the accident and is currently undergoing rehabilitation. Jeri Bryant donated her helmet campaign t-shirts (featuring the slogan “Strap One On–Everyone’s Doing it”) to an eBay store set up to raise funds for King Dye, and a partnership was formed, resulting in the Riders4Helmets campaign.