The Alltech Arena at the Kentucky Horse Park was packed on Saturday night for the inaugural Freestyle Reining World Championship.

The event was held in conjunction with the Rolex Kentucky Three-Day Event and drew many eventing fans to come and check out reining for the first time. Part of the draw was that four eventers would be competing on borrowed reining horses. Gina Miles, Hamish Cargill, and Karen and David O’Connor each had a go before the very enthusiastic crowd. While David O’Connor said he’d ridden reiners before, the other three were brand new to the sport.

The top prize in the competition went to Shane Brown of Colorado who rode his stallion Houston Shine in a nearly flawless performance to Jamey Johnson’s song, “In Color.” The pair drew thunderous cheers from the audience for their perfectly choreographed routine.

Pete Kyle of Texas won second place with an entertaining routine to Toby Keith’s “Go to Mexico” that included a costume change and hands-free riding that won the crowd over.

“[Freestyle reining] is a very entertaining event for spectators, and so we get a lot of new people to come watch it,” said Kyle, “It’s good for our sport because more people watch it, enjoy it, and think, ‘That looks like fun. I want to go try it,’ and that’s what it’s all about”

“I think the biggest thing you can say about freestyle is that it’s a spectator sport,” said Heather Johnson, who finished third with her horse Doublenotyourreeboks “There’s actual involvement from the spectators. I think that’s the best thing about it is that people get to go out and hoot and holler. It’s just a lot of fun. It’s a really good introduction to [reining].”

David O’Connor, who came in sixth overall, enjoyed the atmosphere of freestyle competition.

“The thing about it is, we all need to learn that this is a real spectator-friendly sport,” said O’Connor. “In our sport, we need to be willing to go there and really get the crowd involved.”

With the success of the inaugural Freestyle Reining World Championship, organizers plan to continue the event alongside next year’s Rolex Kentucky Three-Day Event. To learn more and see full results, visit www.kentuckyreining.com 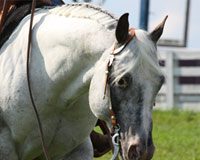