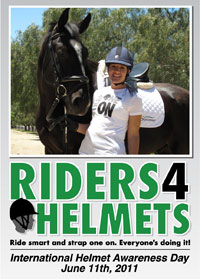 Riders4Helmets has teamed up with leading helmet manufacturers to offer discounts on
helmets to equestrians via participating retailers globally on this day. Over three hundred
retailers in the USA and 8 retailers Internationally offered discounts on helmets from
eight different manufacturers during last years’ event. It is anticipated that the 2011 event will attract participation from over 500 equestrian retailers globally.
Helmet brands that have committed involvement in the promotion to date include:
Samshield, Troxel, Charles Owen, GPA, Aegis (Devon-Aire), Pegasus, Tipperary,
Ovation, IRH and KEP Italia. Additional manufacturers are expected to commit to
participating and will be announced in due course.

Individuals or organizations wishing to hold an event to recognize International Helmet
Awareness Day may email admin@riders4helmets.com for helmet awareness graphics
and other support materials. “You can participate and show your support just by wearing
a helmet on June 11th, no matter whether you are trail riding, showing or competing”
said Lyndsey White, co-founder of the riders4helmets campaign. “Additionally,
Riders4Helmets logo wear is available for purchase at www.equestriancollections.com
for equestrians who wish to show their support for the campaign.”

Equestrians may visit www.riders4helmets.com to locate their nearest participating
retailer. Manufacturers or retailers wishing to participate in the event may visit the
International Helmet Awareness Day page on the website for details on how to become
involved and to download promotional support materials.

For more information on the Riders4Helmets campaign, visit www.riders4helmets.com
or contact Lyndsey White at lyndsey@riders4helmets.com. You can also follow the
campaign at Riders4Helmets’ facebook and twitter pages.
The campaign is officially endorsed by USEF, USEA, USDF, USHJA, AETA, ARIA,
EAF, CHA, PRO, EMSA and many leading equestrians.

Riders4Helmets was founded in early 2010 after Olympic dressage rider Courtney King
Dye was seriously injured in a riding accident. King Dye, who remained in a coma for a
month following her accident, was not wearing a helmet at the time of the accident and is
currently undergoing rehabilitation. Jeri Bryant donated her helmet campaign t-shirts
(featuring the slogan “Strap One On–Everyone’s Doing it”) to an eBay store set up to
raise funds for King Dye, and a partnership was formed, resulting in the Riders4Helmets
campaign. 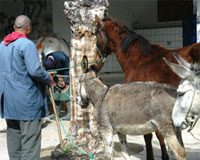