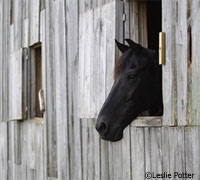 The Animal and Plant Health Inspection Service (APHIS) has been tracking cases of Equine Herpesvirus (EHV-1) since the first cases of the outbreak were reported in early May. With its final situation report issued on June 23, APHIS reports no new cases of the disease.

EHV-1 is fairly common, but the neurologic form of the disease, called Equine Herpes Myeloencephalopathy (EHM) can be fatal and is contagious between horses. All cases of EHV-1 and EHM in this spring’s outbreak were traced back to the National Cutting Horse Association Western National Championship in Ogden, Utah, April 29-May 8. The original carrier of the disease was never identified, but EHV-1 and EHM infections were confirmed in ten western states and Canada after the competition.

The incident forced many stables into quarantine and caused the cancellation of many shows and events in the western United States. With no new cases reported, APHIS has officially declared the outbreak to be contained.

The Laws of the Lead Rope