On Friday, July 8, Alltech founder Dr. Pearse Lyons and Normandy 2014 chairman Laurent Beauvais officially announced that Alltech would be the title sponsor of the 2014 FEI World Equestrian Games. The 2014 WEG will be held in Normandy, France.

The announcement comes just after the release of a study that showed the economic impact of the 2010 Alltech FEI World Equestrian Games at $201 million, much higher than expected.

“Alltech is proud to continue our partnership with the World Equestrian Games,” said Dr. Lyons. “These world championships of equestrian sport epitomize the values that we applaud; passion, excellence and performance…France and Normandy in particular, with its worldwide reputation of excellence in horse breeding, is a strategic location for our company. Alltech has a long-standing history of serving the agricultural community in France and we are thrilled to support the event in Normandy and to share in the pride of this spectacular event.”

“This is the best business decision he ever made because the branding and business recognition have been phenomenal,” Dr. Lyons said after the 2010 games.

Alltech has gone from a behind-the-scenes producer of animal feed supplements to a household name in equestrian circles. The company introduced its consumer equine nutritional supplement, LifeForce, around the same time as the 2010 WEG. 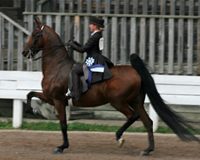