Tourists come to North Carolina’s Currituck Outer Banks to enjoy the sandy beaches, ocean breezes, and the unique sight of wild horses wandering the shoreline. Preservationists of these horses, known Corolla Horses, are concerned that increasing interaction with these tourists is putting the horses at risk.

Earlier this summer, a young Corolla foal was found suffering from apparent malnutrition. Veterinarians intervened and tried to nourish the foal back to health, but he died after only two days in their care. A necropsy revealed that the foal suffered from an impaction and infected intestine. A resident reported that she had seen someone feeding the foal and its mother just days earlier.

The Currituck Wild Horse Ordinance prohibits anyone from getting closer than 50 feet to a wild horse. Petting or feeding the horses can result in a $500 fine. However, many tourists either aren’t aware of the rules or simply ignore them, putting the humans and horses at risk.

In response to the foal incident, the Corolla Wild Horse Fund has hired three people to patrol the beach to help prevent future violations of the ordinance. Previously, most of the policing was done by volunteers. Additionally, a proposed new ordinance would require wild-horse tour operators to obtain a license, reducing the number of vehicles trailing the horses on the beach.

The stepped-up enforcement for the Corolla Horses follows a similar scenario on Assateague Island, Va., where interactions between tourists and wild ponies have resulted in dangerous situations for people and equines.

For more information on the Corolla Horses, visit www.corollawildhorses.com 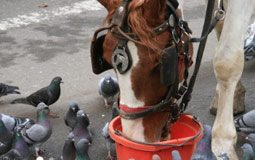