Home Horse News Study on the use of whips in Thoroughbred racing wins Australian science... 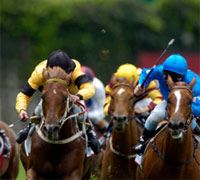 Four researchers from the University of Sydney’s Faculty of
Veterinary Science were awarded the Eureka Prize, a prestigious honor in
Australia’s scientific community. Specifically, the researchers won the prize for
Scientific Research That Contributes to Animal Protection.

The use of whips during Thoroughbred racing has contributed
to the negative public image of the sport. Riders and trainers within the
industry have claimed that whips are necessary tools, but the Eureka Prize
winning study called that assertion into question.

The study, titled, “An Investigation of Racing Performance
and Whip Use by Jockeys in Thoroughbred Races,” found that whipping a horse does
not increase the horse’s likelihood of placing at the top of the field, and
that horses ran faster when not being whipped.

“Professor [Paul] McGreevy’s team has been instrumental in
bringing an ethical dimension to horse training and racing at an international
level,” says Frank Howarth, Director of the Australian Museum. “Moreover, the
team has shown through scientific research that much of the harm currently
inflicted on horses in sport bears no real benefits anyway.”

The full study is available for download at www.plosone.org