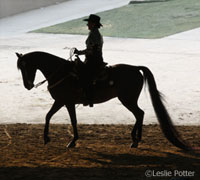 More than 1,000 Morgan horses are gathered in Oklahoma City
this week for the Grand National and World Championship Morgan Horse Show,
which runs through October 15.

The show will take place in three separate arenas showcasing
the versatility of Morgan horses. National and World Champions will be crowned in saddle
seat, hunt seat, western and driving divisions as well as hunter over fences
and jumpers, dressage, carriage driving and reining. One recent addition to the
wide variety of classes is the western dressage final. Western dressage is a
relatively new discipline designed to combine classical dressage training with
western horsemanship.

Another highlight of the Grand National is the Youth of the
Year finals. Throughout the season, American Morgan Horse Association (AMHA)
members under age 21 can compete at state and regional Youth of the Year
contests where they are scored on a written test, a ridden pattern, a judging
contest and an oral presentation. Local winners are then eligible to compete in
the national competition. The national Youth of the Year winner receives a
prize package that includes: educational opportunities, such as internships or
trips to national conventions; rewards including scholarships or custom riding
apparel; and the opportunity to serve as a breed ambassador at national
conventions.

The first official Morgan Grand National was held in Detroit
in 1973. The show was moved to Oklahoma City in 1975. Oklahoma City was selected as
a more central location for Morgan exhibitors from coast to coast.

Spectators can watch the show at the Oklahoma State
Fairgrounds daily at 9 am, 1 pm and 7 pm. Admission is free on weekdays. This
year is the first that the live webcast of the Grand National is available for
free. All three rings will be available for online viewing. To watch the show,
visit www.mgnlive.com or www.usefnetwork.com.