Immaculate jumping won Individual eventing medals at the 2011 Pan American Games – and the top three horses were beautifully ridden over three days. Canadian Jessica Phoenix held onto her dressage lead, adding nothing to her winning score of 43.9 with Don Good’s Pavarotti. She had the Team Gold medal-winning Americans chasing her all weekend, and after the last fence was jumped, she shared the medal podium with two of them. Hannah Burnett and Harbour Pilot won Silver and Buck Davidson on Absolute Liberty won Bronze.

Burnett (The Plains, VA) rode with determination far beyond her 25 years on Jacqueline Mars’ 8-year-old Irish Sport Horse gelding Harbour Pilot. They were third after the dressage on a score of 45.2, jumped a foot-perfect round on Saturday in the cross country and then cemented her medal with two clear rounds in the show jumping. Burnett’s teammate Michael Pollard (Dalton, GA) jumped a terrific clear on Schoensgreen Hanni in the first round, only to have two rails in the Individual round and drop to fourth place.

“I’m just really honored to be on this horse and this team,” said Burnett. “I’m also really happy for Jess… The team competition definitely had a bit more pressure, you want to make your team proud and your country proud.”

But Harbour Pilot was produced by David O’Connor, so there are a lot of people with a stake in this homebred of Mars’. Burnett felt the weight of all of the connections of her horse.

“William’s owner couldn’t be here this weekend, David trained the horse, there was a lot of pressure – I wanted to do well for them,” said Burnett. “I am just honored. It’s fantastic to be part of a team like this and have the camaraderie that we had throughout the week, everyone supports you all the way around, you just have to go and do your job, and my horse did his job.”

Davidson (Ocala, FL) led the team as the most experienced rider of the five – and he was rewarded for his efforts with his first Individual medal. Sixth at the 1999 Pan American Games, Davidson and Sharon Will’s 8-year-old homebred mare Absolute Liberty thrived in Mexico. Davidson knew the team medal was the priority, and the Individual honors were just a bonus. They finished on their dressage score of 48.9.

“For me and this whole team, our goal was to win Team Gold,” said Davidson. “There was more pressure and more joy in winning the Team Gold. We are such a close team, I feel bad for Michael – I almost feel guilty sitting here. You want to come as a team, win as a team and leave as a team – and that’s what we’re going to do.”

Buck Davidson’s father won Individual Gold in 1995, and he is now making history on his own.

“It’s a great honor to ride for your country,” said Davidson. “I’m very excited for Sharon Will who bred her and raised her and thought she was something special, she went through a couple of people but she landed in my barn and I’m very thankful.”

Follow the U.S. Team at the Pan American Games (photos, blogs and more) at USEFNetwork.com 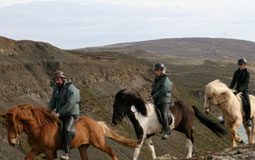 Travel Far and Away With Equitrekking