Home Horse News What flavors do horses like best? 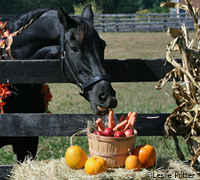 This Thanksgiving, you might be thinking about
giving your horse a special treat before enjoying your own holiday feast. You
could go the traditional route with carrots, apples or peppermints, but if you
really want to give your horse something special, go with…fenugreek?

In 2005, researchers at Southampton University’s
Equine Behavior Centre in Great Britain conducted a study to determine horse
flavor preferences. They started with 15 different flavors, but eliminated Echinacea,
coriander and nutmeg when some of the eight horses in the study refused to eat
food flavored with those spices.

Another four flavors were eliminated because, while
the horses did eat them, they were not eaten as quickly as the remaining eight
flavors. The flavors that received this lukewarm reaction from the horses were
ginger, garlic, turmeric and—most surprisingly—the beloved apple.

In the second part of the study, the remaining
eight flavors were offered in pairs to determine which flavors horses preferred
over the others. This was done until each horse had been offered every possible
pairing of flavors. The final results, in order of preference were:

In the third phase of the study, researchers added
fenugreek and banana to unflavored mineral pellets, which on their own, horses
found unpalatable. It took the horses an average of 195 seconds to eat the
pellets, and in some cases, they did not finish them. The banana and fenugreek
flavored pellets were consumed in an average of 52 and 66 seconds,
respectively.

Wondering where you can get some fenugreek for your
horse? You may be able to find it at specialty food stores. It’s a spice often used
in curries and other dishes from Indian and North African cuisine. The flavor
is described as bitter, but with a smoky, sugary flavor that has caused it to
be used as a base for imitation maple flavoring.

So if you’re looking for a way to include your
horse in the Thanksgiving and holiday-season festivities this year, think
outside the apple and try one of these flavors.

*Because of the high potassium content, bananas should not be fed to horses that have or may have HYPP.
**While horses may enjoy artificial cherry flavor, actual cherries are toxic to horses. Click here to learn more about horse poison prevention.