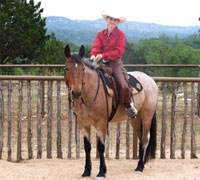 Mary adopted Lindsay’s Faith as a 6 year old wild Mustang in May of 2010. Mary and Lindsay ventured on the journey of a lifetime as they developed a bond that would change both of their lives in ways that could never have been foreseen. Lindsay was born in the rough, cold terrain of White Mountain, Wyoming in her wild Mustang herd. Wild and untouched, she headed towards long term holding until the Mustang Heritage Foundation created the inaugural Supreme Mustang Makeover. An event specifically for older, unwanted wild Mustangs. Mary jumped at the opportunity to compete. In May of 2010 Lindsay’s Faith and Mary began their partnership. Mary named Lindsay’s Faith after her father, Lindsay Miller III. Mary feels so blessed to have a father that has been a catalyst to the realization of her dreams.

“What more could one ask for than a father that has faith in his daughter, even if her dream is to train a wild horse in 3 months?” said Mary. “The faith of a father is pure and unconditional.”

After making the coveted Final Round of the Mustang competition, Mary competed with Lindsay in her first ACTHA ride only a few months later and then went on to enter America’s Favorite Trail Horse. “It was just perfect for Lindsay. She loved the trail, the outdoors, and the natural obstacles.” Mary is so proud of her little wild Mustang mare. “I for one feel honored to have such a brilliant American Mustang as part of my American life and I am proud to be her student.”

A sorrel American Quarter Horse gelding named Curly Man McCue ridden by Ronald Sullivan of Alabama, was awarded Second Place in America’s Favorite Trail Horse, with earnings from the series of $20,000. The Bailef, ridden by Wendy Stephens, of Louisiana, captured Third Place with $15,000 in winnings from the series.

Don’t miss your chance to be part of Season Two of America’s Favorite Trail Horse. Horses all over the country will have a chance to win over $100,000 in cash and prizes, including a new 4 Star Living Quarters trailer! Got to www.actha.us to register.

Fake it or Make it