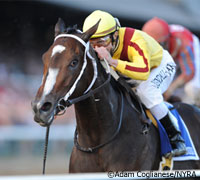 There will surely be high expectations for the newest addition to Stonestreet Farm. The colt, born Sunday, Jan. 22, is the offspring of 2007 and 2008 Horse of the Year Curlin and 2009 Horse of the Year Rachel Alexandra.

According to a news release on Stonestreet Farm’s website, both mare and colt are doing well, and Rachel is a natural mother. This is her first foal.

A name has not yet been announced for the colt, who has a star on his forehead and is said to bear a striking resemblance to his famous mother.

Rachel Alexandra won the Preakness Stakes in 2009, breaking an 85-year dry spell for fillies winning that race. Curlin won that race in 2007 and was the 2007 Breeder’s Cup Champion and 2008 Dubai World Cup winner.

The colt will race under the Stonestreet Farm banner, just as Rachel and Curlin did. Rachel’s next venture into motherhood is already planned. She will be bred to Bernardini, sire of Zenyatta’s unborn foal, later this year.

Stonestreet Farm has posted photos of Rachel and her colt on Twitter. Click here and here to see them.