Yesterday, we featured an introduction to tent-pegging, one of the two regional disciplines recognized and governed by the FEI. The other one of those disciplines is horseball, a team sport that requires agility, courage and horsemanship skill.

Horseball is played in a riding arena of approximately 20×60 meters, such as a large dressage arena. At each end of the arena, one-meter loops hooked vertically 4.5 meters of the ground serve as the goals. Two teams of four riders face off, attempting to score points on each others’ goals in a fashion similar to basketball. A team must complete three passes between three different team members before scoring a goal.

The ball is modified with leather handles so that it can be picked up off the ground from horseback. Riders lean precariously off the side of their horses to grab the ball, and to make this possible, they use a piece of equipment called a belly strap. The strap connects the stirrups underneath the horse so that the outside stirrup doesn’t slide over the top of the horse when the rider reaches for the ball.

Any horse can be used for the sport and according to the FEI, most of the horses used at the novice level are all-rounders used in a variety of other disciplines and activities. At the higher levels of competition, some riders prefer speedy Thoroughbreds while others like to use shorter, more compact ponies for their agility and proximity to the ground.

Horseball is a relatively new addition to the world of equestrian sports, having been loosely adapted from the Argentinean sport of pato by the French Equestrian Federation in the late 1970s. The Federation wanted to find a way to revitalize riding schools, and horseball was invented as an inexpensive sport that could be easily started within existing riding programs.

Today, horseball is most popular in Europe and parts of South America, but it has gained enough popularity in parts of Asia, Africa, Australia and North America for member associations and organized competitions to exist globally.
For more information, visit the Fédération Internationale de Horse-Ball homepage at www.fihb-horseball.org/en/ 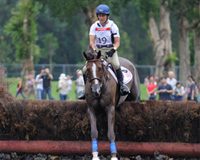 Bounce Back to Fitness