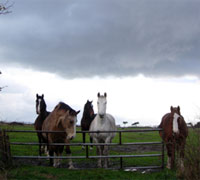 Severe weather can be a troubling event, especially when there are animals whose welfare and comfort is of concern as well. Small pets can usually take cover with their owners, but what precautions can an owner take for larger animals such as horses?

“The first step in protecting your horses and other livestock from severe weather is to realize what the severe weather risks are in your area,” says Dr. Brandon Dominguez, clinical assistant professor at the Texas A&M College of Veterinary Medicine (CVM) & Biomedical Sciences and member of the CVM Veterinary Emergency Team. “For many areas, springtime brings threats of severe thunderstorms, lightning, flash floods, and tornadoes.”

Often owners like to keep horses stalled in a barn to protect them from lightning during a storm, but giving them the ability to travel could keep them safer.

“Generally, if horses are in a pasture with trees or near a lightning rod, the risk of the horse being struck is greatly diminished. A three-sided shelter can help to keep them warm and dry during a storm in addition to shielding them from lightning strikes,” says Dominguez.

Dominguez believes that when storms become more severe, to possibly include tornadoes or high gusts of winds, horses are even safer outside of their stalls.

“It is wise to keep barnyards and pastures clear of debris before storms are due to strike. If a tornado were to hit a barn with horses secured in stalls, the likelihood and severity of being hit by debris would be considerably increased,” says Dominguez.

True, horses in pasture may not escape completely unscathed, but the cuts and contusions are usually less significant.

With torrential rainfall, flooding, and particularly flash flooding, if horses are given the opportunity to move to higher ground away from danger, they will follow their natural instinct for survival. Flash flooding, if injury or obstacles prevent horses from escaping, can lead to a horse being swept downstream and potentially drowning.

“Less harsh, but just as serious, are the consequences of standing in perpetually flooded pastures. The chronic exposure to moisture could lead to softening of the hoof and sole leaving a horse susceptible to stone bruises, sole abscesses, white line disease, and infection such as thrush,” says Dominguez.

Dominguez explains that rapid drying may cause hooves to crack and become brittle, but keeping feet cleaned and picked out and applying hoof conditioners will help minimize the harm from flood waters. Additionally, flooding may cause toxins to spread from storage areas to pastures where horses are gathered exposing them to contaminants that they would not ordinarily contact.

“The most ideal confinement during severe weather would be a large pasture with a three-sided shelter to protect animals from the elements, but that also allows them to escape from danger. Not being in the lowest portion of the field, but in the vicinity of trees or a lightning rod is also advantageous,” says Dominguez.

With the variety of horse-owners, horse-properties, and horses, planning before severe weather occurs should take into consideration the ability to keep everybody safe.