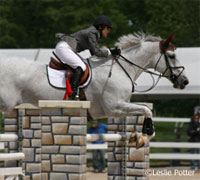 Both youth and experience prevailed at the 2012 USEF National Show Jumping Championship at the Palm Beach International Equestrian Center and with three horse/rider combinations tied at the end of the third round – the race for the overall title was wide open. It was standing room only for the second to last Saturday night of the 2012 FTI Consulting Winter Equestrian Festival, and Alan Wade’s courses continued to prove influential and challenging in the fourth and final round.

It was a battle between youth and experience between Margie Engle – one of the winningest veterans on the Grand Prix circuit and 17-year-old Reed Kessler who is only eligible to jump in the senior ranks for the first time in 2012. In the end Engle and Kessler were tied at the end of four rounds and decided between themselves not to jump-off to determine a single winner. The result meant that Kessler won her first title and Engle was crowned National Champion for the third time.

“You’d hate to be greedy and just do it for the money or the title,” said Kessler.

Held for the first time since 2008, the 2012 edition of the National Championship ran in conjunction with the USEF Selection Trials for the U.S. Show Jumping Team for the 2012 Olympic Games.

Both Kessler and Engle had one rail in the final round, theoretically forcing a jump-off for the $200,000 National Championship title. Tied on 12 faults after round four – the two riders decided that with a goal of the Olympic Games on the horizon, they would split the night’s highest honor and let their horses call it a night after a long week of jumping.

“This was a lot of jumping,” said Engle. “What’s important is having some horse left. These were a lot of big courses.”

Kessler (Armonk, NY) set a high standard early on, when she secured a 13 fault four round finish on her first horse Mika with a phenomenal clear effort. The Zone 2 Team Bronze medalist at the 2010 Adequan FEI North American Junior/Young Rider Championships presented by Gotham North out rode her years in poise and skill on both horses. But it was Cylana, her ‘overscoped equitation horse’ who did battle for the National title. They jumped another immaculate round but were victims of the troublesome last fence, a liverpool at the end of a difficult line.

“This is the best week of my life,” said Kessler, clearly still absorbing the magnitude of what she had accomplished. Mika finished tied for third with Flexible and Rich Fellers (Wilsonville, OR) and Urico and Mario Deslauriers (New York, NY).

Kessler rides with Katie and Henri Prudent, and deferred to her mentors on the decision about returning to the ring for the jump-off.

“I don’t make those decisions, Katie does,” she said.

Cylana, a 10-year-old Belgian mare is no more experienced than her pilot at this level, and before the Florida circuit she hadn’t shown higher than 1.45m.

But Kessler and her mare both rose to the occasion and handled the pressure with class.

“She’s all business all the time,” said Kessler of Cylana.

Local favorite Engle won the 1988 and 2008 USEF National titles and she rode with her usual determination on Garber, Greise, Hidden Creek and Gladewinds Indigo. The 12-year-old Dutch gelding jumped an inspired effort – just punching out the front rail of the eighth fence.

“It was a good course,” said Engle. “It was kind of what I expected. My horse felt great, the rail was my mistake, I rushed the turn I was worried about the time and I pushed him past it. I’m so proud of him, he has so much blood and so much heart he just digs deep and tries every time… he gives you everything he has.”

A veteran of the 2000 Olympic Games and 2006 FEI World Equestrian Games, Engle knows that the road to any championship is long one – but she believes in Indigo and what he has accomplished.

“You have to go along and do the best you can and see what happens,” said Engle. “The horses proved they were consistent.”

Kessler has never jumped even jumped on a Nations Cup team, although she does have considerable experience at the Junior and Young Rider level in team competition. An alum of the European Young Rider Tour and the USEF Junior Jumper National Championships “Prix des States” in addition to NAJYRC.

“I just can’t even believe I am sitting here,” said Kessler at the press conference. “I can’t describe how much I’ve learned about my horses and myself throughout these trials.”

The ranked Long List of all the athlete/horse combinations (including the four combinations that were named before the Trials began) who wish to remain eligible for the Olympic Games is available here.

Video on demand from all the Trials is available at USEFNetwork.com

Caring for a Blind Horse