Home Horse News Where do horses like to roll?

To most horse owners, rolling is just a normal equine behavior, or at worst, an inconvenience when a freshly groomed horse heads straight for the sloppiest mud puddle to enjoy a roll. But rolling can cause damage to grass, which becomes an issue when grazing is in short supply.

Researchers at Japan’s Shinshu University executed a study to find out if horses had a preference for rolling on different surfaces. The researchers set up a paddock that was just pasture grass to serve as a control, and an experimental paddock of the same size that also had three rolling areas: dry soil; sand; and straw.

Providing a dirt rolling area in a grass paddock may help horse owners and farm managers preserve more grazing area by encouraging all of the horses to roll in one place instead of in various locations on the grass. For more information, visit www.equinescienceupdate.com 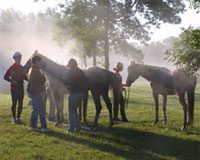