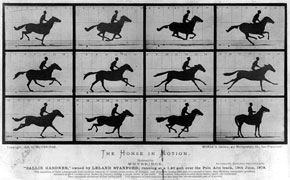 If you’ve visited Google today, you probably noticed the equine-themed Google Doodle, or today’s themed variation on the usual logo. Today’s Doodle is commemorating the 182nd birthday of photographer Eadweard Muybridge. Click on the play button, and the still photos move to show the horse galloping. The series of photos, called Sallie Gardner at a Gallop, or sometimes simply The Horse in Motion, was revolutionary when Muybridge created it in 1878. The images answered a long-debated question about whether there was ever a moment when all four of a galloping horse’s hooves left the ground.

The photos were the result of a quest by Leland Stanford, racehorse owner and former governor of California, to settle the question of the horse’s footfalls at the gallop. He hired Muybridge, who set a line of cameras next to the track, each triggered by a thread as the horse galloped past. The resulting images of Stanford’s mare, Sallie Gardner, captured each moment of the gallop, including the moment of suspension when no hoof touched the ground. When shown in rapid succession, the images create one of the earliest examples of motion picture.

Prior to Muybridge’s photography, artists often depicted galloping horses in full extension, like a greyhound, with front and back legs extended. Muybridge’s work showed that such a moment never actually occurs in the gallop. The moment of suspension is actually when all four legs are bent underneath the horse’s body.