UPDATE 4/13/12: The toll has been raised to 18 equine deaths, according to an article in the Northwest Herald. Two horses are still missing.

The cause of the fire is under investigation, but early reports state that investigators are focusing on a controlled burn that took place near the facility and a charcoal barbecue nearby.

The fire began around 5 p.m. on April 11, around the time that most of the horses would have been brought indoors after their daily turnout. According to a report in Chicago’s Daily Herald, local residents and horse owners were among those who helped free horses from the stable before the smoke and heat became too intense. Two people were treated for smoke inhalation after assisting with rescue efforts and have since been released from the hospital.

The stable has stalls for sixty horses, but only around 31 horses were reported to be in the barn at the time of the fire.

Firefighters encountered additional difficulties in extinguishing the fire as it had already engulfed much of the building by the time they arrived. Because there were no fire hydrants nearby, water had to be trucked in, taking up additional time.

Nearby stables have offered board to the rescued horses. At this time, the stable’s owner and trainer, Richard Wright, has not made any comment on whether he plans to rebuild.

Further Reading
Be Prepared for a Barn Fire 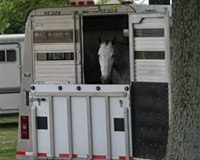