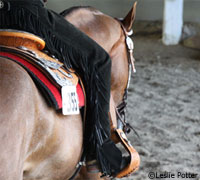 This season, the NCAA equestrian program changed its name to the National Collegiate Equestrian Association (NCEA). The organization held its first national championships last week under its new moniker at the Extraco Events Center in Waco, Texas.

The NCEA championships are done in a bracket system with riders competing head-to-head. The overall winner is decided by which team had more individual victories. In case of a tie, the riders’ raw scores will be used to determine the victor.

On the western side, the Texas A&M Aggies continued to be a dominant force, winning their fourth consecutive team championship. The victory was a close one as the Aggies only narrowly edged past Oklahoma State University in a raw-score tiebreaker.

The scenario was repeated in the hunter seat division, with Texas A&M and Baylor University each earning two individual wins. This time, the raw-score tiebreaker came out Baylor’s way, giving the Baylor Bears the overall championship and putting Texas A&M in reserve.

Equestrian has been classified as an “emerging sport” by the NCAA since 1998. There are currently 23 colleges and universities that offer equestrian as a varsity sport. One of NCEA’s primary goal is to promote equestrian to full NCAA championship status, which requires 40 Division I and II schools to have participating teams. NCEA teams are restricted to women, although schools are permitted to have both NCEA and Intercollegiate Horse Shows Association (IHSA) teams, provided they only attend one national championship. IHSA teams can be co-ed.

For more information about NCEA and full results from this year’s national championships, visit www.varsityequestrian.com.