The 2012 Rolex/FEI World Cup Final came to an exciting conclusion Sunday afternoon at the Indoor Barbant in the final competition, held over two rounds. Louis Koninck once again challenged riders over two stiff courses. However, a total of four rounds of competition were not enough to crown a winner of the 2012 Finals. Rich Fellers of the United States and Switzerland’s Steve Guerdat remained tied on one fault following the conclusion of the second round. They would need to return to the ring for a final jump-off to decide a winner.

When Fellers (Sherwood, OR) and Harry and Mollie Chapman’s Flexible entered the ring as the second combination in the jump-off the U.S. was amidst a 25 year drought of Rolex/FEI World Cup Finals winners.

Fellers and the 16-year-old Irish Sport Horse stallion scorched to a clear round over the short course in a time of 25.97; besting Guerdat and Nino Des Buissonnets by .64 seconds.

Chef d’Equipe George Morris summed up the thoughts of all in the U.S. camp when he reflected about how it felt to have a winner for the first time since 1987.

Fellers entered the second round of competition in a three-way tie for the lead after a fault free effort in Sunday’s initial round. Just as he had done Thursday, on his way to winning the speed leg of the Finals, Flexible produced an efficient, tidy round over the 12 obstacle course. In the second round, the pair produced another clear round to force the jump-off.

Heading into the final day of the championship, Fellers the runner-up in the 2008 Finals with Flexible, believed he could win with his partner of 10 years.

“I went in there thinking; I’ve got to win this. I may not get another chance with Flexible and he’s such a good horse.”

Richard Spooner, Beezie Madden and Kent Farrington also landed in the top twenty of the overall standings for the United States.

Madden (Cazenovia, NY) and Abigail Wexner’s Cortes ‘C’ completed in 17th place, in the horse’s first attempt in a Finals. In round one they lowered the height of fences at 10 and 12B for an eight fault total. In the second round, the U.S. team veteran recovered masterfully after experiencing difficulty in the triple, to jump an otherwise tidy round.

Finishing in 18th place was Farrington (Wellington, FL) and RCG Farm’s Uceko. The pair had four and eight fault totals in the two rounds of Sunday’s final competition. 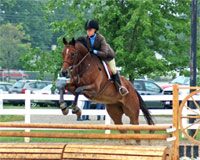