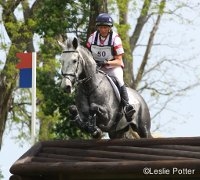 Get your big screen ready and set to NBC as the culminating Show Jumping phase of the 2012 Rolex Kentucky Three-Day Event Presented by Bridgestone will be broadcast live on NBC on Sunday, April 29, from 2:00-3:00 PM EDT.

One of the world’s most prestigious equestrian competitions and the only CCI4* in the Western Hemisphere, the Rolex Kentucky Three-Day Event Presented by Bridgestone returns to the Kentucky Horse Park in Lexington, KY, April 26-29. The event attracts tens of thousands of spectators and millions of viewers worldwide on international telecasts, including this year’s expanded live telecasts that will bring all the action to viewers across the nation live as it happens.

With the support of Rolex Watch U.S.A., the United States Equestrian Federation (USEF) and Equestrian Events, Inc. (EEI), organizer of the Rolex Kentucky Three-Day Event, NBC will give viewers the opportunity to share in the excitement of the final Show Jumping rounds of America’s only Four-Star eventing competition. The NBC telecast will be aired as the Rolex Equestrian Championships Presented by Land Rover.

Adding to the unprecedented coverage will be live telecasts on Saturday, April 28 on Universal Sports Network from 10:00 AM–12:00 PM EDT and on the NBC Sports Network from 1:30–3:30 PM EDT, both of which will feature cross-country. In addition, all rounds of competition each and every day will be available in the U.S., Canada and Mexico through free live webcasts on the USEF Network presented by SmartPak available at either www.usefnetwork.org or www.rk3de.org. Throughout the rest of the world coverage will be provided by FEI TV at www.feitv.org.

This year’s Rolex Kentucky Three-Day Event features selection trials to choose the Land Rover/U.S. Eventing team for the 2012 London Olympic Games. The nation’s best horses and riders will be competing in the hopes of earning places on the team for this summer’s Olympics.

“We are so excited to bring all of the thrilling action of the Rolex Kentucky Three-Day Event into America’s living rooms,” said Lisa Ball, EEI President. “Sunday’s Show Jumping phase is always so dramatic and this year, with Olympic berths at stake, it is sure to be a showdown that all equestrian sports fans will want to see.”

The Rolex Kentucky Three-Day Event will host horses and riders from around the world who will join their U.S. counterparts in competing for $250,000 in prize money as well as a shot at the $350,000 Rolex Grand Slam of Eventing, which is awarded to any rider who wins the Rolex Kentucky, Mitsubishi Motors Badminton and Land Rover Burghley Four Star Events in succession. Former Rolex Kentucky champion William Fox-Pitt of Great Britain, who won his record sixth Burghley championship last fall, will be seeking to win a second leg of the Rolex Grand Slam at Kentucky in the hopes of joining 2003 champion Pippa Funnell of Great Britain, the only rider to win the Rolex Grand Slam.

For more information on the 2012 Rolex Kentucky Three-Day Event Presented by Bridgestone, or to purchase tickets, please visit the Rolex Kentucky website at www.rk3de.org.

Why Does My Horse Hold Her Head Crooked?