The 2012 edition of the Rolex Kentucky Three-Day Event proved to have one of the most influential cross-country courses in recent memory. There were no serious injuries to horses or riders, although many riders had falls. One horse fell early on course, James Alliston’s 10-year-old Thoroughbred gelding Parker. He walked onto a trailer for a ride back to the barn and is reported to be fine. Of 54 starters, 20 jumped clear, 12 completed with at least one refusal, and 22 were eliminated or retired.

Despite all the problems, the top riders held their own. One of only seven double-clear rides of the day (no jumping or time penalties), Great Britain’s William Fox-Pitt and Parklane Hawk moved into first place. They smoothly negotiated the course, avoiding the problems that had caught out so many other pairs. “I was out on course this morning watching the first few riders,” said Fox-Pitt. Olympic veterans Andrew Nicholson and Karen O’Connor were the first two riders on course and didn’t make it past jumps #9 and #5, respectively. “You had to ride as positively as you could, and the horses responded to that. The ones that got a good start were well set up for that horrible skinny brush thing [#9c].” The jump he was referring to had no less than 15 runouts. “It was a good day, but not not what a lot of people expected,” added Fox-Pitt. “When we walked it, it looked very nice, but there were a few tricks. You didn’t know how horses would read the fences, especially turning in the water with three or four strides to do it. The first water didn’t look difficult, but didn’t ride like it looked. By the time they got to #9 they weren’t looking straight ahead.”

Overnight leaders Allison Springer and Arthur added just 3.2 time penalties to bump them into second. Springer opted to take the long route at the third-to-last combination that caused them to have a fall last year. “It was always my plan to go the long way,” she said. “He was so honest, scopey and straight. I’m thrilled with my round, and we dealt with the different things that came up.” This was Arthur’s fifth time going to Rolex, and his third time jumping clear on cross-country. “I never walked it thinking it would be easy, but I did think it was fair,” she added. “You had to have a well thought-out plan for each jump and be determined to get to other side of each fence.”

When asked about the complex at #9, the Bridgestone Park Question, course designer Derek di Grazia said, “It was a truly legitimate coffin [jump/ditch/jump]. Usually if you jumped well in, you jumped well out. The pairs with hesitation and a four-legged jump over ditch had problems on the way out, but a flowing jump went easily through. It was a rider fence; riders had to tell their horses, ‘This is where we’re going.’”

Designing the course for the second straight year, di Grazia explained his strategy. “I always try to find a track that flows well. Certain areas are always there: the sunken road, the hollow, and the Head of the Lake. Every year we change that into a different order and put complexes where I think they’ll work best, giving horses a breather and confidence-building jumps in between.” Since the London Olympics will have a lot of steep terrain, he also incorporated Kentucky’s rolling hills into terrain questions where possible to give potential Olympic pairs a feel for it.

Moving up from fifth to third with a double-clear round was New Zealand’s Jonathan Padget aboard Clifton Promise. The pair completed Rolex in 2010 as well, but are in much better placing this time around. “This course had a really nice flow, and [Clifton Promise] found a gear and stayed there the whole time,” said Padget. “There were serious bravery questions early on and a technical question coming out of the coffin. I didn’t expect this much carnage, but you know you’re in for a [tough] day when [six-time Olympian and first rider on course] Andrew [Nicholson] walks home.”

Showing how much of a shake-up in the standings was possible, Boyd Martin moved from sixteenth place into a tie for fourth (with Karen O’Connor and Mr. Medicott) after a double-clear cross-country ride. Likewise, a double-clear moved Will Coleman and Twizzel from nineteenth to sixth. Phillip Dutton, Boyd Martin and Marilyn Little-Meredith all impressively rode two mounts to clear cross-country rides, with the latter two having both rides placed in the top 10 going into stadium jumping on Sunday. The final phase of the three-day events tests the carefulness of the horses after a tiring day of jumping fast and flat on cross-country.

Fox-Pitt cannot afford to have a single rail down on Sunday if he wants to guarantee a win, but the rest of the top 10 are much more widely separated than they were after dressage.

For full scores and information, go to www.rk3de.org. 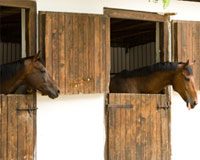