When put on a restricted diet, overweight ponies have been shown to snack on stall bedding according to research from the Liverpool University Veterinary School in Great Britain.

Wood shavings are often considered a safe alternative to straw for horses or ponies that tend to consume bedding, but the research shows that overweight equines put on a diet often settle for shavings.

A group of 12 overweight ponies was divided into two groups, each given a different restricted diet of 1.25% of their body weight. They were weighed weekly and their diets adjusted accordingly. The ponies were turned out for 30 minutes daily with muzzles to prevent them from grazing.

By analyzing the manure produced, researchers determined that at least half of the animals had been eating the wood shavings in their stalls. Some had consumed more than 3 kg (about 6.6 pounds) of bedding, and five out of the 12 ponies had apparently consumed more than 1 kg (2.2 pounds) daily.

The researchers concluded that horses and ponies put on a restricted diet should be carefully monitored to ensure they are not supplementing their own diet from non-food sources.

Keeping horses turned out in a dry lot or outfitting them with a grazing muzzle may help keep them at a healthy weight without the health risks associated with consuming wood shavings. If they must be stabled, using bare rubber mats and providing stable toys to keep them occupied may be practical solutions. 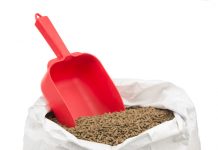 Plan Ahead for Equine Feed Needs, But Not Too Far Ahead

What Fall Cleanup Means on a Horse Farm