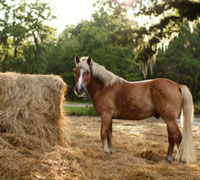 During the month of April, 23 horses died or were euthanized at Whistlin’ Willows Farm in Gorham, Maine due to botulism. The disease is not contagious and neighboring farms are not likely at risk.The farm specializes in buying and selling horses and has a variety of breeds and ages on the property.

Investigations found that the most likely source of the disease was balage that the horses were fed. Balage, also called haylage, is hay that is baled shortly after cutting and wrapped in plastic where it ferments and can be stored for long periods before being fed out.

Balage carries a high risk of botulism, and for that reason, most horse owners and managers avoid it. The process of baling and fermenting balage is fraught with difficulties, and a small error can lead to ideal conditions for Clostridium botulinum, the bacteria that causes botulism.

Although rare, botulism is a serious disease in horses. It is often fatal in unvaccinated equines. The disease affects its victims by blocking transmission of nerve impulses, ultimately leading to muscle weakness and paralysis, inability to swallow and hypoventilation leading to respiratory arrest.

One of the most common forms of botulism is Shaker Foal Syndrome. In the mid-Atlantic and around Kentucky, broodmares are often given the botulism vaccine as it will transfer to the foal. Horses fed round bales in that region may also need to be vaccinated. The disease is not common in New England where April’s outbreak occurred, and the horses involved were not vaccinated.

According to Maine’s state veterinarian, the farm had another 40 to 45 horses that also became sick but have recovered, most likely because they ingested less of the contaminated feed than the horses that died.

The disease can occur in regular round bales if they are contaminated with an animal carcass. The bacteria are also found in poultry feces. Cases of botulism in humans have occurred due to improperly canned or preserved food.

Horse owners are encouraged to discuss vaccination options with their vets. Horses outside of the mid-Atlantic region and those that are not fed round bales may not need the vaccine. 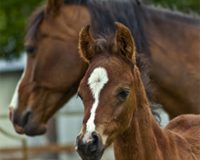 Question of the Week: Birth Control for Mares