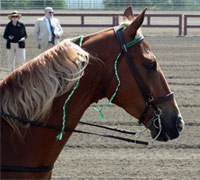 Soring, the illegal practice of causing irritation or pain to a horse’s pasterns or hooves to increase the height and reach of the show-ring gait, has been in the news lately. Hidden-camera footage from inside Tennessee Walking Horse trainer Jackie McConnell’s stable brought the abhorrent practice into the public eye when it aired on ABC’s Nightline last month.

Soring has been around in the Tennessee Walking Horse industry and in some other gaited breeds since the mid-20th century and was made illegal under federal law in 1970, but the abuse persists today. How widespread it is remains a contentious subject. Trainers and fans of gaited horse shows maintain that soring is only done by a few bad apples, but animal welfare activists and many horsemen and women from within the gaited horse world say that soring is common practice and practically required to create the motion that wins championships. Inspectors at horse shows are charged with weeding out any sored horses, but the process is somewhat subjective and has increased the tension between horse show exhibitors and the officials charged with protecting the horses.

The hidden camera footage that aired on May 16 reignited the furor over soring. In the disturbing video, McConnell and his assistants are shown applying chemicals to a horse’s pasterns and hitting a horse that is lying in his stall in order to force him back up on his feet. Other footage shows a crosstied horse being beaten over the head in a practice known as “stewarding,” which is intended to teach a horse to stand stalk still for inspectors, even when they are in pain. The Nightline clip is available here but viewers are warned that the footage is extremely disturbing.

After the Nightline piece aired, the soring controversy bubbled over from the show horse industry into the general public, where awareness of the decades-old practice—and the decades-long fight against it—was almost non-existent.

The Horse Protection Act, which is administered by the United States Department of Agriculture’s (USDA) Animal and Plant Health Inspection Service, set up a system of inspections and penalties to keep sored horses out of the show ring. The HPA has been plagued by difficulties since its inception. The program has the funding to send USDA inspectors to a relatively small number of shows, leaving the industry to self-police at most competitions. Using inspectors from within the industry has been notoriously ineffective. Furthermore, trainers like McConnell have found ways to work around the system and get their horses in the ring even when they’ve been charged under the HPA.

The USDA is hoping to give the HPA some teeth with a change to the regulation that was announced on June 5. The change requires that all horse industry organizations (HIO) that inspect horses under the HPA adhere to a protocol of minimum penalties. In the past, some HIOs have been less strict about issuing penalties, and as a result, those shows have attracted more competitors. The new regulation aims to level the playing field and create more consistent deterrents to soring. HIOs that fail to comply can be decertified by the USDA.

According to the USDA:

This final rule requires that suspensions for violating the HPA be issued to any individuals who are responsible for: showing a sore horse; exhibiting a sore horse; entering or allowing the entry of that horse in a show or exhibition; selling, auctioning or offering the horse for sale or auction; shipping, moving, delivering or receiving a sore horse with reason to believe that such horse was to be shown, exhibited, sold, auctioned or offered for sale. This includes the manager, trainer, rider, custodian, seller or owner of the horse, as applicable.

An individual who is suspended will not be permitted to show or exhibit any horse or judge or manage any horse show, horse exhibition or horse sale/auction for the duration of the suspension.

For more information on the Horse Protection Act, visit www.aphis.usda.gov/animal_welfare/hpa_info.shtml