Home Horse News British riders are in first and second position after day one of... 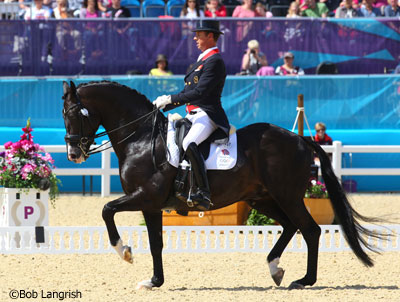 Carl Hester and Uthopia of Great Britain took an early lead and held it on day one of Olympic dressage competition. Photo: Bob Langrish

Great Britain has never won a medal in Olympic dressage, but with arguably its strongest team ever, this year has the potential to be the end of the streak. The first British rider to compete was veteran Carl Hester riding the Dutch Warmblood stallion Uthopia. Their stunning performance earned them a 77.720 and gave them the early lead by a wide margin. They held on to that lead, and remain in gold-medal position after the first day of dressage. 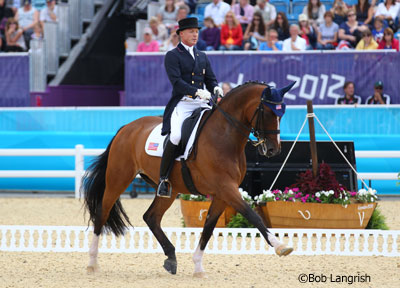 Jan Ebeling and Rafalca, a 15-year-old Oldenburg mare, were the only American horse-and-rider pair to compete today. They had a solid ride in their Olympic debut and earned a 70.243 from the judges, which put them in 13th place at the end of the day.

Although no medals were awarded, history was still made today as Hiroshi Hoketsu, an individual rider representing Japan, took to the ring with his horse, Whisper. At age 71, Hoketsu is the oldest rider to compete in equestrian at an Olympic games. Meanwhile, Jacqueline Brooks of Canada may have made history of her own, being likely the first dressage rider to wear a helmet while competing in the Olympics.

Don’t Daydream on the Trail!