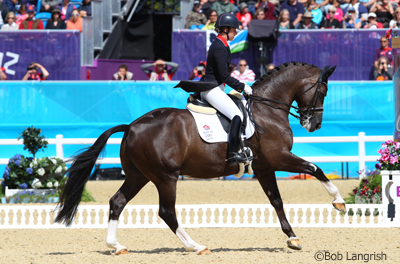 Charlotte Dujardin and Valegro are in first place after the first round of grand prix dressage competition at the 2012 London Olympics. Photo: Bob Langrish.

The traditional Olympic dressage powerhouses of Germany and the Netherlands saw their dominance broken today as Great Britain finished the first phase of grand prix dressage holding the top spot in both team and individual dressage.

Early in the day, Kristina Sprehe of Germany scored a 79.199 and took the individual lead away from Great Britain’s Carl Hester, who ended yesterday on top of the leaderboard. She held on to that lead for much of the day, until Great Britain’s rising star Charlotte Dujardin, 27, entered the arena with Valegro. Dujardin made history earlier this year as the first British rider to score in the 90s in grand prix dressage. While she didn’t repeat that feat here, her 83.663 was good enough to take a comfortable lead.

The last two rides of the day had to be tense for the British team and fans. The seasoned team of Adelinde Cornelissen and Parzival were second to last, and scored 81.687. It was good enough for silver, but still left Dujardin with a nearly two-point lead. The final rider of the day, Helen Langehanenberg of Germany, had a spectacular test with Damon Hill, but her score of 81.140 was just good enough for third place position.

The British team currently stands at the top of the team leaderboard, followed by Germany and the Netherlands.

The U.S. team is currently in fifth position.

American rider Tina Konyot was the first in the ring today with her stallion, Calecto V. The big-moving Danish Warmblood earned a 70.456 from the judges in the pair’s Olympic debut. The pair is in 27th place, which is good enough to qualify for the Grand Prix Special.

Adrienne Lyle and Wizard were the second American pair to compete today. A few mistakes during the first half of the otherwise-solid test brought them a score of 69.468 and 35th place, which put them just out of qualifying range. Lyle, who competed as an individual for the U.S. at this Olympics, is the youngest U.S. dressage rider in London at age 27 and will undoubtedly have more Olympic opportunities in her future.

The final American to ride today was Steffen Peters with Ravel. This pair is the most experienced duo representing the U.S. in dressage and fans had high hopes for their ride today. They performed beautifully, earning a 77.705 from the judges and a sixth place finish overall.

Dressage competition continues on August 5. The equestrian events will shift gears tomorrow with the first day of show jumping competition.