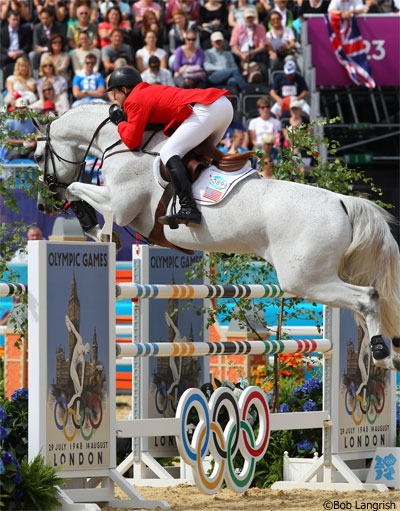 McLain Ward and Antares F led the Americans with a fault-free round on the first day of Olympic show jumping competition. Photo: Bob Langrish

The sun came out today, as did a huge crowd of 22,000 people, for the first qualifying round of Individual Show Jumping at the 2012 London Olympics. 75 competitors from around the world jumped a course in Greenwich Park of 12 fences, cleverly designed with British themes, including the Magna Carta, Trafalgar Square and Stonehenge.

Team USA had an excellent start to the competition. Mclain Ward led the way by jumping a neat and tidy round on Antares F, an 11-year-old Wurtemburger gelding. Eighteen-year-old Reed Kessler, the youngest rider to ever compete at an Olympic games, galloped around the course with only one time penalty on Cylana, her 10-year-old Belgian Warmblood mare. Reed moves on to the next round. Rich Fellers and Flexible, an Irish Sport Horse stallion who at 16 is the oldest horse on the American team, had one of the speediest clear rounds of the day, crossing the finish line at 78.53 seconds.

Beezie Madden’s round on Via Volo started well, with the diminutive 15.2 hand Belgian mare clearing the first eight jumps with feet to spare. Via Volo ran into trouble at the ninth fence when she got too close to the first fence of the combination, jumped it awkwardly and then ran out at the second fence. Beezie approached the combination again, but a rattled Via Volo refused at the second fence causing the pair’s elimination.

Many riders felt that the 82 seconds allowed to jump the course was quite fast, and most wasted no time getting round. The course caused little trouble for most riders and there were 32 clear rounds. The bogey fence appeared to be fence three, the Naval Mines, a massive triple bar to a vertical. Several horses refused at this fence and it caused a couple of eliminations. Sweden’s Matrix got a bad stride at the tricky orange and black obstacle, crashed through it and deposited his unlucky rider Lisen Fredericson on the ground in what was thankfully the only fall of the day. Lisen walked away uninjured. 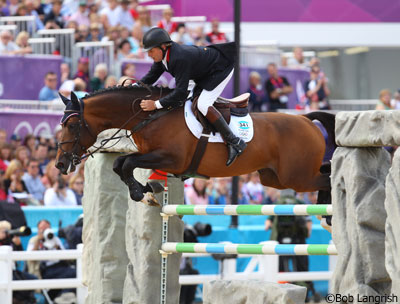 The loudest cheers of the day were reserved for the home team of British riders, Nick Skelton, Ben Maher, Scott Brash and Peter Charles–all wearing helmets emblazoned with the Union Jack. Nick Skelton, who rides Big Star, is an Olympic veteran who is competing in his sixth Olympics, an amazing achievement considering he broke his neck in a fall in 2000 and was told by doctors that he might never ride again.

Reigning world champion Phillippe le Jeune of Belgium made the course look easy as he popped around clear on his lovely chestnut stallion Vigo D’Arsouilles. Current Olympic champion Eric Lamaze of Canada also had a clear round. Devastated by the loss last year of his outstanding stallion Hickstead, Eric has obviously filled the gap in his team with the talented Belgian mare Derly Chin De Muze. His teammate, Ian Millar, incredibly competing in his 10th Olympics, had one fence down on Royal Power but finished with no time penalties.

After the third round, the best 35 riders, based on combined scores, move on to the fourth round in which the 20 best riders , based on scores from this round only progress to the fifth and final round on August 8 to compete for an individual medal.