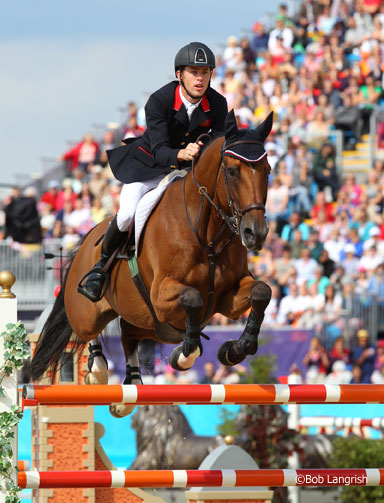 Day three of Olympic show jumping saw 51 riders take the field in the team final and individual third round competition. The top eight teams and 45 individuals remained in contention for medals at the end of yesterday’s competition. Because of the Olympic format, today’s round included some riders who had been eliminated as individuals but were still on qualifying teams, members of eliminated teams who were still eligible as individuals, and a lucky few who remain in the running for both team and individual medals.

As the first several riders took their turn in the arena, it seemed like a fault-free round might be impossible. The ninth rider on the schedule, American-born German competitor Meredith Michaels-Beerbaum skillfully navigated the course to be the first rider to finish with no jumping faults. One time fault kept her from perfection.

The next rider to go clear and the first to go double clear was another German rider, Marcus Ehning. He and Plot Blue floated around the course effortlessly, finishing with no faults. In an unusual twist of fate, the German team had already been eliminated from team medal contention, so Ehning and Michaels-Beerbaum’s superior rides were only to their individual benefit.

Clear rounds from British riders Nick Skelton with Big Star and Scott Brash and Hello Sanctos helped secure Great Britain’s team lead. At the same time, the Dutch team earned its way into a tie with the British team. This meant the final round of team competition would move on to a jump-off to determine gold and silver.

In the jump-off, the first two riders from both teams went clear. The third Dutch rider dropped two rails for eight faults, and the third British rider, Scott Brash, posted four faults. The lowest score for each team would be dropped, putting pressure on the final rider from each team. The Netherlands’ final rider had just one rail down for four faults, but that wasn’t good enough. In a tense final ride, British rider Peter Charles went clear and the stadium erupted into cheers for Great Britain’s first team show jumping gold medal in 60 years. The Netherlands walked away with silver and Saudi Arabia won bronze.

For the Americans, McLain Ward and Antares were the first horse-and-rider pair on the schedule today. Antares attacked the course aggressively, clearing some jumps with ease, but knocking down two rails for eight faults overall. Beezie Madden and Via Volo were next for the Americans. The fiery mare made easy work of the course, but took down one rail, adding four faults to the U.S. team score. Reed Kessler and Cylana had two rails down and a foot in the water for a total of 12 faults. Rich Fellers and Flexible, who had been perfect in the first two rounds for the Americans, ended with eight faults in the third round.

The American team finished tied for sixth place. Rich Fellers and McLain Ward will both continue to the next round of individual competition. Show jumping competition resumes on Wednesday. Equestrian competition continues tomorrow with the dressage Grand Prix Special. 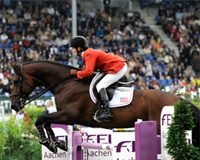