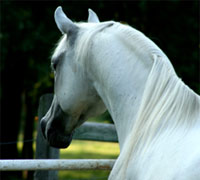 From now through August 18, Arabian and half-Arabian exhibitors from around the U.S. and Canada will be competing for national titles in Brandon, Manitoba. The 55th annual Canadian Arabian & Half-Arabian Championship Horse Show is one of the most important competitions on the Arabian show schedule and is considered part of the breed’s triple crown along with U.S. Nationals and the Scottsdale Arabian Horse Show.

To watch all the action from the Keystone Centre, visit arabianhorseglobal.com. An account on the site is required to view the show, but there is no cost to sign up or watch the video.

According to the Arabian Horse Association, there will be 642 horses entered in this year’s show in 187 different classes. Exhibitors will showcase their horses in traditional halter and performance classes as well as dressage, sidesaddle, driving, reining and jumpers.

Learn more about the show at ArabianHorses.org

Watch footage from the 2010 Canadian Arabian Nationals below.