Equestrian vaulting is a sport that combines the power and courage of traditional equestrian sports with the grace and physical challenge of gymnastics. Daring athletes perform gymnastic and dance-inspired moves on the back of a cantering horse along, in pairs or in groups.

The sport of vaulting is still growing in the United States, but with success at the 2010 Alltech FEI World Equestrian Games, American vaulters are becoming serious contenders on the world stage. Five athletes will have the chance to test their abilities against the world’s best this week during the 2012 FEI World Vaulting Championship, held in Le Mans, France. Here’s an overview of this year’s team.

Ali Divita is a 23-year-old student at the University of California, Berkeley. She has been vaulting since she was 12 and has plenty of international competition on her resume. She finished second at the 2010 CVI2* in Germany, then represented the U.S. at WEG that same year, finishing seventh. This year, she has already racked up a third place at in Chilliwack, B.C., Canada and a fourth at the CVI3* in Krumke, Germany.

Mary McCormick, 29, is one of America’s most successful competitive vaulters. She was the American Vaulting Association (AVA)/United States Equestrian Federation (USEF) National Championship in 2007, 2010 and 2012, and was named USEF Vaulter of the Year in 2007 and 2009. She is currently a coach for the Mt. Eden Vaulting Club, her alma mater in the sport, as well as the Silver Star Vaulters of Tennessee.

Katharine Wick, 19, has been competing internationally since 2005. She won an AVA/USEF National Championship as part of the Woodside Vaulters team in 2007. Individually, she won second in the CVI2* at Chilliwack in 2010 and in the CVI2* at the CVI Saratoga in 2011. This year, she has competed successfully in Germany and France and placed fourth in the CVI3* at Chilliwack.

Gabe Aniello, 22, is a relative newcomer to the sport of vaulting, having competed at the CVI level for the first time in Kentucky in 2009. This year, he won the CVI3* Individual Senior Men’s class at Chilliwack.

Patrick Stevens, 22, is a member of the successful Woodside Vaulting Club of California. As an individual, he was named National Vaulting Champion at the silver level in 2007 and finished second in the gold division in 2009.

Blake Dahlgren, 28, and Megan Benjamin, 24, will compete in the Pas de Deux, where two vaulters perform simultaneously on one horse. Benjamin is one of the most recognizable names in American vaulting, having won individual gold and team silver at the 2006 WEG. She was the first non-German woman to win the individual championship at any WEG. She retired briefly, but returned to competition in 2008, competing and winning with the F.A.M.E. Dark Side of the Moon team. In 2010, she placed second at the USEF/AVA National Champion as an individual and went on to represent the U.S. at the 2010 WEG. Dahlgren has had individual success as well, winning second place at the 2008 National Championship, fourth at the 2010 National Championship, and winning team gold at the 2010 WEG.

Eight members of the Woodside Vaulters of Woodside, Calif. will be representing the U.S. as a squad. The club’s history begins with its founding in 1990, and includes countless individual and team competition titles at every level of the sport. Woodside has sent members to every WEG since 1998.

Learn more about the U.S. Vaulting Team at USEFNetwork.com and AmericanVaulting.org. 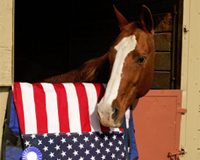