One of the highlights of the summer show season for fans of American Saddlebreds and Hackney Ponies is the annual World’s Championship Horse Show. The show has been part of the Kentucky State Fair in Louisville since 1902 and continues to be a popular spectator event for lifelong breed supporters and non-equestrian fairgoers alike.

The 2012 edition of the show kicked off on Sunday, Aug. 19 and will continue through the evening of Saturday, Aug. 25. The entire show will be broadcast live from Louisville’s Freedom Hall via USEFNetwork.com. The show is free to watch online.

Saddlebred breed shows primarily feature these horses performing in saddle seat classes, from country pleasure, where horses should appear to be suitable for pleasure riding on the trail, to the high-energy performance classes. Some Saddlebreds are three-gaited and are judged at the walk, trot and canter while others are five-gaited and perform the smooth, four-beat slow gait and rack in addition to the other three gaits. The saddle seat equitation division will determine the world champions for riders age 17 and younger. Besides the saddle seat classes, horses will show in pleasure driving and fine harness classes and in the increasingly popular western pleasure division.

The show also serves as the World Championship for Hackney Ponies, shown primarily in harness. Championship titles will be awarded in the roadster horse division as well, where the speed and elegance of Standardbred horses is on display.

For more information on the show, visit ASHA.net. 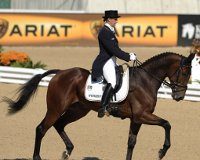 German Eventers Take an Early Lead in Day One of Dressage