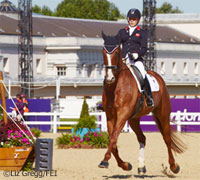 On the second day of competition, the remaining three grades – IV, III and Ia – took center stage for their first London 2012 Paralympic outing to perform in the team test. All five grades have now completed the team test and the all-time record holders Great Britain have taken a strong early lead. The best three scores in the team test from each nation are added to the best three scores in the individual championships test to decide the winner. The individual championship tests will be taking place over the weekend and count for both the team score and for individual medal honors.

Grade IV
Friday was a beautiful but cold day in Greenwich Park with big blue skies to greet the spectators for a 9 a.m. start. The day began with another winning British performance, this time by Sophie Wells, the current world and European champion competing at her first Paralympics. Riding Pinocchio, the 22-year-old posted an international personal best score of 75.906%, giving Great Britain a second top mark towards their overall team score.

Belgium’s Michele George came in second place amongst the fourteen riders competing in Grade IV. Frank Hosmar, Individual silver and bronze medalist from the 2010 Alltech FEI World Equestrian Games in Kentucky also delivered the goods, with a score of 71.781 towards the Dutch team score.

Grade III
Germany’s Hannelore Brenner broke the British domination in each of the Grades with a wonderful performance on Women of the World earning her the third best score of the day. It is this very same partnership that currently holds European, world and Paralympic titles – so definitely firm medal contenders in the individual tests.

The British are never far from the top spot, and it was Deborah Criddle, reigning European Freestyle champion that slotted neatly into second place on a very respectable score of 72.926. Third place in the Grade III team test went to Denmark’s Annika Dalskov, silver medalist at the Alltech FEI World Equestrian Games in Kentucky in 2010 and at the 2008 Paralympic Games, riding Aros A Fenris.

Grade Ia
Great Britain’s Sophie Christiansen, third from last to go in the Grade Ia Team test, delivered an amazing performance riding Janeiro 6 and finishing on a score of 83.765 – the top score of the Games so far. Singapore’s Laurentia Tan did not disappoint for her first London 2012 experience, taking second place riding Ruben James 2 much to the delight of her family and friends standing by. She was the first rider representing an Asian country to win an equestrian medal at the Paralympic Games in 2008 and is looking like a strong contender here. Third place in the Grade Ia Team test went to Helen Kearney on Mister Cool, giving the Irish team some valuable points.

Standings after the Team Tests
Overall, the British riders took the top spot in all the Grades for the Team test events with the exception of Grade III where Hannelore Brenner broke the spell to take pole position ahead of British team member Deborah Criddle. Given their remarkable performance at all levels, they are set on a course for gold and there is little that could stop them now, only the next two days will tell how they fare.

Runner up position and third place however are hotly disputed with Germany, Denmark, The Netherlands, USA, Ireland, Belgium and France battling for the coveted Paralympic medals, so there will be a lot of pressure on the riders this weekend as they set out on their first individual performances while trying to secure points for their teams.

See all 2012 Olympic and Paralympic equestrian news at HorseChannel.com/Olympics

Are You Ready for Some Clydesdales?