Home Horse Care Horse Nutrition When is the best time to feed grain to your horse before... 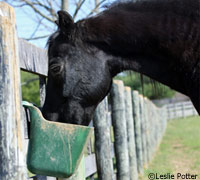 One of the most common questions asked about feeding the performance horse is when to feed before a competition. Theoretically, feeding should be timed so that all of the nutrients from a meal have been digested, absorbed, and stored before starting exercise, but not so long before exercise that the horse begins to mobilize fuels just to maintain its resting body functions.

It is probably better to exercise horses eight hours after feeding rather than fasting them overnight, since an overnight fast may disrupt digestive function and may lead to gastric ulceration.

To test this hypothesis, Kentucky Equine Research (KER) conducted an exercise experiment. Six trained Thoroughbreds performed a standardized exercise test (SET) at three different times after eating a grain-based meal. The exercise was performed eight hours after eating, three hours after eating, or after an overnight fast. This SET, carried out on the high-speed treadmill, consisted of a two-minute warm-up walk, one-half-mile trot, one-half-mile slow gallop, one-mile fast gallop (25 miles per hour), and a warm-down trot and walk. Heart rate was monitored throughout exercise and blood samples were taken before feeding, hourly until the beginning of the SET, throughout exercise, and 15 and 30 minutes post exercise. Blood was analyzed for glucose, insulin, and lactate.

Heart rate was higher at the slow gallop and during the warm-down trot when the horses were exercised three hours after feeding. Insulin was significantly higher in the three-hour-fed horses at the beginning and throughout exercise. Blood glucose was also higher after the three-hour feeding at the beginning of exercise. During exercise, however, blood glucose dropped in the horses exercised three hours after eating while it increased in the horses fasted overnight or fed eight hours before work. Lactate increased with exercise, but was unaffected by time of feeding.

The large drop in blood glucose experienced by the horses worked three hours after feeding is not desirable. Basically, the horse has three sources of energy to fuel muscle contraction during exercise. It can use fat, either from the diet or from body stores; it can use muscle glycogen; or it can use blood glucose. Fat stores are plentiful and are good sources of energy during slow work. As exercise intensity increases, faster fuel is needed and glucose is oxidized. If this glucose originates from muscle glycogen, stores are fairly plentiful and depletion is unlikely at distances shorter than endurance rides.

The horses exercised three hours after feeding experienced a large drop in blood glucose because insulin was elevated at the onset of exercise. This caused an increased uptake of glucose by the working muscle. The horses exercised after an overnight fast or eight hours post feeding began work with resting levels of both glucose and insulin. During exercise, blood glucose actually increased, indicating that the horses were mobilizing liver glycogen at a faster rate than the glucose was being cleared from the blood.

Time of feeding had no effect on lactic acid accumulation during exercise, suggesting that time of feeding only affected how fuels were used for aerobic exercise. Anaerobic energy generation was unaffected. This means that during extremely intense exercise of short duration such as a Thoroughbred race, time of feeding is not nearly as important as when the horse is performing strenuous exercise of longer duration such as the cross-country phase of a three-day event. All of the parameters measured responded nearly the same whether the horses were fed eight hours before work or fasted overnight. It is probably better to exercise horses eight hours after feeding rather than fasting them overnight, since an overnight fast may disrupt digestive function and there is evidence that fasting horses may lead to gastric ulcers.

Kentucky Equine Research is an international equine nutrition, research, and consultation company serving both the horse owner and the feed industry. For more information, visit ker.com or visit our online library of nutrition and health articles at Equinews.com.