The United States Equestrian Federation Board of Directors assembled in Lexington, Kentucky on August 27th for the 2012 USEF Mid -Year Meeting. The election of a new President, to take office in January 2013, topped the agenda. Olympic Gold Medalist David O’Connor has served as the USEF President since 2004.

The President ultimately presides over the volunteer leadership structure of the Federation. Since 1917, only 12 individuals have served in the presidential role and the process for election of a new President had been carefully developed by the USEF Planning Committee in anticipation of this historic moment. In recent months the USEF Nominating Committee received nominations and conducted interviews with candidates for the office. Georgie Green, Chairman of the USEF Nominating Committee presented the Committee’s report naming Chrystine J. Tauber as the Committee’s recommendation for the office. The nomination was not contested and Chrystine J. Tauber was elected unanimously to serve a four year term commencing in January 2013.

When asked to envision her role as the President Tauber commented, “Looking back over my career in the horse industry, spanning some 50 years, I realize how fortunate I am to have had so many great opportunities to work with talented horses, trainers, and fellow leaders in the equestrian world who provided me with invaluable knowledge and experiences. Through working together and our shared love of horse sports, I have come to know and appreciate all the wonderful breeds and different disciplines that make up the special tapestry of the U. S. Equestrian Federation. This varied group dynamic is what is so unique to the USEF.”

As Tauber looks to the future she continues, “it is important to also have knowledge of [the Federation’s] history and purpose. Past president Adrian Van Sinderen emphasized in his book Our Highest Purpose that ‘our great organization has been built upon the public’s confidence in us. Its sole effort is to improve the sport; its purpose is to maintain the highest ideals in the show ring. May those ideals never be compromised, may unquestioned fairness and justice forever mark its progress.’ These words were written in 1960 and still resonate in today’s show world. Over the years, the guiding principles for all our breeds and disciplines remain that of putting the love of the sport and the welfare of the horse at the fore. We must never lose sight of that.”

John Long, USEF Chief Executive Officer commented on the election saying, “Chrystine Tauber’s leadership promises a clear and bright beacon for the future of the Federation. The USEF staff look forward to the benefits of her vast experience and her vision for the Federation’s role in equestrian sport. David, senior staff, and I have already begun the transition process. Chrystine was in London and we met with HRH Princess Haya, President of the FEI. Our organization can look forward to a coordinated pass of the baton which is an indication of how far we’ve come in the last nine years.” 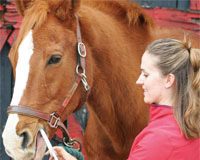