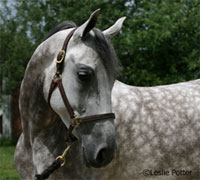 National Show Horses are traditionally a cross between purebred Arabians and American Saddlebred horses. This particular crossing has been popular with fans of showy Arabians for a long time, but the breed became official with the beginning of the National Show Horse Registry (NSHR) in the 1980s. These horses are marked by an upheaded neck carriage and animated way of going from their Saddlebred blood and the distinctive shapely face, high-set tail and trademark endurance of their Arabian parentage. Recently, the NSHR began accepting all registered half-Arabians into the breed, although the breed standard remains geared toward the saddle-type horse.

The primary arena for the National Show Horse is saddle seat competition. Horses compete in country pleasure, for horses that appear suitable for pleasure riding; English pleasure, where horses are judged almost equally on their manners and animation; and park and three-gaited classes, where the showiest high-stepping horses compete. Because of their Saddlebred lineage, some National Show Horses are also able to perform the smooth, four-beat slow gait and rack and compete in five-gaited classes.

National Show Horses also possess the versatility of their Arabian heritage. At the finals, they compete in hunter pleasure, western pleasure, driving and halter.

The show is available for live viewing online at ArabianHorseGlobal.com. 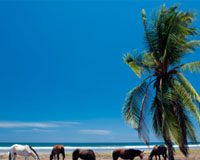