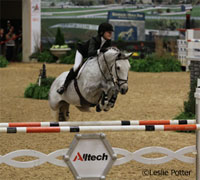 The orange and black decorations around the Kentucky Horse Park this week aren’t just for Halloween. The trademark colors of the Alltech National Horse Show (ANHS) are welcoming some of the world’s top hunter, jumper and equitation riders to the Alltech Arena for the 129th edition of this historic show, which begins today and continues through Sunday, Nov. 4.

The National Horse Show was first held in New York City’s Madison Square Garden in 1883. For more than 100 years, the National was a highlight of the American show circuit and a formal affair for spectators. After a transitional period in the early 21st century, the show found a title sponsor in Kentucky-based biotech company Alltech and a new home at the Kentucky Horse Park’s Alltech Arena.

This year is the second ANHS in the new Kentucky location, and the show has already started to expand. American Saddlebreds were a big part of the show in its New York City days, but that division had dwindled and eventually left the show altogether. This year, Saddlebreds will compete again in three-gaited, five-gaited, park and fine harness classes.

The majority of the daytime classes will be for hunters while Saddlebreds and jumpers will be featured in the evenings. On Thursday, the Double H Farm $75,000 International Open Jumpers will start the evening session at 7:00 p.m. On Friday evening, the championship classes for open three-gaited, five-gaited and fine harness American Saddlebreds will warm up the crowd before the ANHS $50,000 Puissance takes place. The Alltech $250,000 Grand Prix on Saturday night will draw some of the top riders in the sport of show jumping, including Olympians and other international competitors. The Grand Prix will be followed by the championship classes for amateur riders in the Saddlebred division.

The ASPCA Maclay National Championship, which features the country’s best young equitation riders, will run throughout the day on Sunday, the final day of the show.

The ANHS will hold special events outside of the competition arena throughout the show’s run. Kids are invited to dress in costume on Wednesday to trick-or-treat at the vendors’ booths in the trade fair. Thursday is Military Day, where spectators can meet local military heroes and participate in challenges at the Army Activity Area. Saturday morning will begin with the first Alltech Countryside Canter 5k race at the Horse Park. Kids’ activities during the day will include balloon artists, face painting, and pony rides.

For more information about the show, including ticket info, visit AlltechNationalHorseShow.com. To watch the show live beginning on Nov. 1, visit HorseChannel.com/ANHS2012.