This year’s recipient is IHSA hunter seat rider, Rachel Kolb, of Los Ranchos, NM, who is in her second year as president of the Stanford Equestrian Team, and co-terminal year at Stanford (CA) University (i.e., she will graduate this year with a BA in English and minor in Human Biology as well as a Masters in English).

In the classroom, Kolb earned an 2011 IHSA/EQUUS Foundation Scholarship and, in 2012, was recognized as an IHSA Senior Athletic Academic Achievement Award recipient, and led Stanford to the first Team IHSA All-Academic Award (since the creation of the distinction in 2011). Elected as a junior to Phi Beta Kappa, she is managing editor of the Leland Quarterly, a campus literary magazine, and an opinion columnist for The Stanford Daily. At Oxford, she plans to pursue a Master’s degree in Contemporary Literature.

“I feel extremely honored to have received the Rhodes scholarship, and I am looking forward to studying at Oxford over the next two years,” Kolb said in an electronic interview. “The news is still sinking in, but I’m already hoping to find a way to ride while in England. I had the opportunity to study abroad at Oxford during my junior year at Stanford, which I loved, so I feel very fortunate to have the chance to return.

“Seeing my trainer, Meredith Houx Remiger (as well as Albuquerque trainer, Elani Rager) ride in high jumper stakes and local Grand Prix inspired me in my youth, and I’ve loved the chance to learn from all my coaches while at the Stanford Red Barn.””

During her time at Stanford, Kolb has built a unique bond and a second language with her IHSA coach, Vanessa Bartsch. “As Rachel has been deaf her whole life, she is remarkably adept at managing in the ring and out,” said Coach Bartsch. “After coaching her for four years, signing to her seems completely normal. I sign to her (while speaking) in all of her lessons, when she is working in the barn, and at team meetings.

“That said, my signing causes a fair amount of hilarity for Rachel, because of my mix-ups and made-up signs. So much so that it has a bit of a life of its own: instead of ASL (American Sign Language), Rachel jokes that I use VSL (Vanessa Sign Language).”

For coach and student, it has been a learning curve ridden together. Bartsch explained, “ASL is comprised of a limited vocabulary of signs, and there are no signs for things like ‘trot’ or ‘gallop,’ let alone ‘impulsion,’ ‘counter-canter,’ or ‘bran mash.’ Rachel and I developed our own vocabulary so I can coach her in lessons and in the show arena.

“It’s always funny when she tries to teach horse signs to the interpreters who sign for her when I’m not there, as some signs, such as ‘trot’ and ‘toilet’ look remarkably similar! None of the interpreters are horse people. They are used to signing in a classroom, so they’ve had a steep learning curve about where to stand in a dressage lesson (in the middle, though they report 20 meter circles make them dizzy) versus a jumping lesson (not in front of a fence).”

Kolb said, “I’ve never viewed my deafness as an impediment to riding, especially since the horses never mind. Having such supportive teammates and coaches, particularly people like Vanessa who make communication so easy, has allowed me to take full advantage of opportunities on the team. Sign language has embedded itself into the team culture in various ways, which has been tremendous fun.”

Bartsch sees a parallel between the high standards of the Rhodes Trust and success as a collegiate equestrian athlete. “Thanks to our amazing organization, which welcomes all types of riders, Rachel flourished not only as a rider but as a leader. She told me that she was asked about riding–and the IHSA–in her Rhodes interviews. I think it speaks to the heart of what we/IHSA do best: allow student athletes to flourish in the ring and the classroom. The experience they get showing, riding, and leading contribute to the trajectory of their lives, regardless of their background or unique challenges.

“There are so many parallels between what the IHSA teaches. ‘Catch riding,’ or learning how to bring the best out of any horse/job/situation/class, is a skill that stays with young people for life.”

Rhodes Scholars are chosen for their outstanding scholarly achievements as well as their character, commitment to others and to the common good, and for their potential for leadership in whatever careers they choose. The Rhodes Scholarship is a prestigious post-graduate award established in 1902 after the death of famed diamond magnate, Cecil Rhodes, and is intended, according to the Rhodes Trust website, www.rhodesscholar.org, to bring outstanding students from around the world to Oxford. 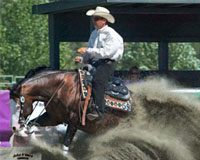 Horses, Dogs and Cats Come Together