Fargis has a long list of accomplishments in the competition arena. He made his first of more than 30 FEI Nations Cup appearances in 1970 in Lucerne, Switzerland, beginning his legacy as a stalwart on U.S. teams. In 1975, Fargis helped the U.S. secure Team Gold at the Pan American Games in in Mexico City, Mexico. Nine years later at the 1984 Olympic Games in Los Angeles, Fargis won Team and Individual Gold with Touch of Class. The pair’s epic performance set an Olympic record as they faulted only a single time throughout the competition (they jumped clear over 90 of 91 obstacles). Fargis furthered his legacy in the 20th century winning Team Silver at the 1988 Olympic Games in Seoul and representing the U.S. at the FEI World Equestrian Games in Stockholm in 1990. Additionally, he twice topped the North American East Coast League in qualifying for the FEI World Cup Final.

Fargis’ legacy, however, is more than just as a competitor. His Sandron Farm is a renowned training facility that has helped shape the careers of many of the best horses and riders in the country. Fargis has also had a lasting effect on the administration of horse sport in the United States as a valued committee member of the American Horse Show Association (the predecessor to the USEF), United States Hunter Jumper Association, and United States Equestrian Team.

Junior Equestrian of the Year – Hunter Chancellor
At just 17-years-old Hunter Chancellor is already epitomizing the dedication, skill and sportsmanship that are required to reach the top of equestrian sport. As a junior at Mater Dei Catholic High School Chancellor, an Evansville, Indiana native, actively participates in American Saddlebred competitions while maintaining a 3.99 GPA. For her talent, integrity and contributions to the equestrian world, Chancellor will be awarded the Ruth O’Keefe Meredith Memorial Trophy as the 2012 Junior Equestrian of the Year.

Chancellor already boasts an extensive resume that includes 145 career wins and 26 World Championship titles. In 2012 she has earned victories at the National Horse Show Saddle Seat “Good Hands” Finals Championship, and the USEF Saddle Seat Medal Finals, a competition she won reserve honors at in 2010 and 2011. Chancellor is a National Honor Society member and is currently in Parys, South Africa competing as part of the U.S. team at the Saddle Seat World Cup.

Hunter is also an active participant in numerous extra-curricular and philanthropic endeavors. She is a member of the Mater Dei High School Cheer Team, Pep Club, Service Committee, and Prom Committee. Additionally, she spent time in 2012 as an intern for John Boehner, Speaker of the U.S. House of Representatives. Chancellor is also the founder of the non-profit organization Horses Against Hunger, an organization that has strived to get young riders, farms, and stables involved in the fight against hunger since 2011.

Pegasus Medal of Honor – Linda Zang
The Pegasus Medal of Honor was created as an annual award to recognize individuals who have exhibited outstanding service to horses and equestrian sport. These dedicated individuals have engaged the community in their passion for horses through their work in the industry. This year’s winner, Linda Zang, has been inspiring and educating for more than 30 years.

Zang, of Davidsonville, Maryland, has been a prominent figure in the sport of dressage in the U.S. and Europe. As a competitor, she rode on U.S. teams at the 1978 World Championships, 1979 Pan American Games, and 1980 Alternate Olympic Games. As an official her influence has been far reaching. She has judged at numerous FEI World Cup Finals as well as at the 1996 Atlanta Olympic Games and throughout the world. As a Technical Delegate, Zang officiated at the 1999 Pan American Games and the 2004 Athens Olympic Games. She has also paid great service to the sport in administrative roles as a former member of the USEF Board of Governors, USEF Hearing Committee, and FEI Dressage Committee. She currently serves as a member of the USEF Licensed Officials Committee and Ad Hoc CDI Committee. Zang is also a renowned trainer, having coached many prominent horses and riders across different disciplines.

For more information about the 2013 USEF Annual Meeting visit www.usef.org/convention. 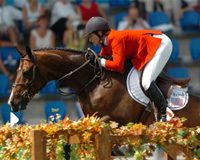