Voting is now open for the coveted 2012 USEF Equestrian of the Year award. Following decades of tradition, the winner will again be announced when the horse world meets at the United States Equestrian Federation’s annual Pegasus Awards gala. This year’s gala will be held on Saturday, January 19, 2013 at The Henry Clay in Louisville, Kentucky and broadcast live on the USEFNetwork presented by SmartPak.

Known as the USEF Equestrians of Honor, eight stars of equestrian sport across breed and discipline recently received a unique competitive trophy. Just one of them will win the distinguished grand prize and be named the “2012 USEF Equestrian of the Year.”

Below are the nominees and the distinctive honors they have achieved: 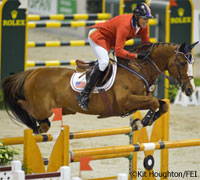 The William C. Steinkraus Trophy is presented to an equestrian competing in the Olympic disciplines of dressage, eventing, or show jumping.

Rich Fellers enjoyed unprecedented success in 2012 both on U.S. soil and abroad. With longtime partner Flexible, he achieved what no American had been able to in 25 years- a victory at the Rolex/FEI World Cup Jumping Final. Fellers and Flexible won the opening speed leg and preceded to produce three clear efforts over four rounds. Still, they remained tied and in a jump-off performance for the ages, Fellers masterfully piloted Flexible to a clear round and stopped the timers .64 seconds faster than the competition.

Fellers then returned to North America to contest the U.S. Show Jumping Observation Events, and claimed victory in all four classes he started. In Del Mar, he and Flexible won the $50,000 Surfside Grand Prix and the $100,000 Hermes Grand Prix of Del Mar. Fellers then traveled to Spruce Meadows, where the pair jumped four clear rounds in two classes, including jump-offs, to win the $35,000 Husky Energy Cup and the $200,000 CN Performance Grand Prix. In August, Fellers made his Olympic debut leading the U.S. team and producing a top-ten finish with Flexible. After returning from London, Fellers travelled to the Thunderbird Equestrian Park and was victorious in the $100,000 Canacord Genuity World Cup.

This is the first time Fellers has been awarded the William C. Steinkraus Trophy. 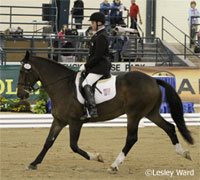 Jonathan Wentz achieved a lifelong dream in 2012 by competing on the world’s grandest stage at the Paralympic Games. Wentz was born with Cerebal Palsy and began his equine endeavors at age two in order to help combat symptoms of the disease. He was only 13 when he began forming that dream of riding at the Paralympic Games, and in 2008 Wentz took one step closer to it when he began riding at the North Texas Equestrian Center and forming a partnership with coach and supporter Kai Handt. Handt would pair the young man with NTEC Richter Scale. Wentz and NTEC Richter Scale went on to represent the U.S. at the 2010 Alltech FEI World Equestrian Games just two years later. Then, in June of 2012, Wentz saw his dream come true when he and NTEC Richter Scale earned the USEF National Para-Equestrian Reserve Championship at the 2012 Selection Trials, and were named to the U.S. Team to compete in London at the Paralympic Games.

In London, Wentz led the U.S. team’s effort in their most successful Championship finish in recent years. He and NTEC Richter Scale came within minutes of standing on the Individual medal podium, only to be edged off by the final riders. They finished fourth in the Grade 1b Individual Test and fifth in the Grade 1b Freestyle Test.

Only weeks after returning from London, Wentz tragically passed away, leaving a void in the hearts of his friends, family and the sport he loved. Wentz is the first athlete to receive the Becky Grand Hart Trophy posthumously.

The Bill Robinson Trophy is presented to an equestrian competing with horses or ponies across all the breeds in harness or for driving performance in non-international competitions.

Gilbert “Gib” Marcucci has a long history of showing Hackney ponies. Marcucci opened the Gib Marcucci Stables in Monmouth, Iowa in 1960 and has been producing and training top Hackney ponies ever since. In 2012, he once again demonstrated his proficiency at training Hackneys in harness, winning the Hackney Pony Stake and the Hackney Pony World’s Grand Championship at the prestigious Kentucky State Fair World’s Championship Horse Show.

Marcucci’s knowledge and recognition go beyond the U.S. and expand into Canada, Bermuda, Great Britain, Holland and Australia. He is a founding member of the United Professional Horsemen’s Association, past member of the Mid-West Hackney Association Board of Directors and, a recognized USEF judge that has judged the World’s Championship Horse Show four times.

This is the first time Marcucci has been awarded the Bill Robinson Trophy.

The Emerson Burr Trophy is presented to a rider in the hunter divisions in any breed over fences.

Jennifer Alfano is no stranger to prestigious wins in the hunter ring and she demonstrated again in 2012 why she is among the best in the game. Alfano has worked for Susie Schoellkopf and SBS Farms Inc. for more than twenty years and teamed up with many of the SBS horses to earn top finishes throughout the United States. With Jersey Boy, Alfano has dominated the USHJA International Hunter Derby circuit for the past four years. This year the pair earned top honors in the $100,000 USHJA International Hunter Derby Finals presented by Dietrich Equine Insurance, one of the few titles that had eluded them. Additionally, they won championships in Jacksonville, Ocala, Devon, at the State College Classic, and at the Skidmore College Saratoga Classic.

A two-time World Champion Hunter Rider, Alfano has been named Leading Hunter Rider at the Pennsylvania National Horse Show, the National Horse Show, and the Ocala HITS winter Circuit in prior years. She currently sits second in the USHJA Lifetime Rider Standings having accumulated $299,650 in International Hunter Derby earnings, $70,000 of which was earned in 2012.

This is the first year she has been awarded the Emerson Burr Trophy.

The C.J. “June” Cronan Trophy is presented to those excelling in under saddle show breeds.

Matt Siemon has been awarded the C.J. “June” Cronan Trophy in recognition of his stellar performances in the Arabian & Half-Arabian English Pleasure and Park Horse divisions. Seimon was born into a third generation show horse family. With his father Chuck as a mentor and teacher, he has made his mark in the Arabian Horse show arena. Aboard Gregg & Nancy Shafer’s Ronde Vu, Siemon rode into the history books winning the Purebred Arabian Park Horse Championship at both the Canadian and U.S. National Championships. This was the second year in a row for the U.S. title. Seimon’s entire show string made themselves noticed in 2012, where he rode and drove four horses to four National Championship titles at the Canadian Nationals and amassed three National and two Reserve National Championship titles in addition to seven Top Ten calls at the US Arabian and Half-Arabian National Championships.

2012 is the first year Siemon has been awarded the C.J. “June” Cronan Trophy.

The Barbara Worth Oakford Trophy is presented to an equestrian showing in a non-reining Western discipline.

2012 is the first time Reser has been awarded the Barbara Worth Oakford Trophy.

The Norman K. Dunn Trophy is presented to the equestrian competing at halter or in-hand.

Notably a true horseman, Bruce Griffin has won numerous national awards in a myriad of breeds, but he is a shining star when it comes to sport horse in-hand and halter. In 2012, Griffin added to his legacy by earning many top finishes with acclaimed Friesians in halter and in-hand classes.

For his achievements this year Bruce has been awarded the Norman K. Dunn Trophy for the first time.

The Vaughan Smith Trophy is presented to the best rider of any horse or pony breed shown in hunter pleasure, show hack, hunter hack, dressage hack, costume, side saddle, or Western dressage.

Wendy Potts has dominated the Arabian and Half-Arabian Hunter Pleasure and Show Hack divisions for decades compiling a staggering 150 National and Reserve Champion titles. 2012 proved to be no exception to her winning ways. Aboard North By Northwest LLC’s Vivienne LR, Potts was crowned the 2012 Canadian National Champion Half-Arab Hunter Pleasure Champion and was the unanimous pick for Champion at the U.S. Nationals, which she won for the second consecutive year. Potts and her students pocketed many other top honors throughout the year, culminating with major wins at the Arabian and Half Arabian Youth Nationals, Canadian Nationals, and U.S. Nationals.

A consummate competitor, Potts excels in the show arena. However, she feels her greatest accomplishment is perhaps the overwhelming and consistent success of her amateur students, many of whom have been loyal clients for more than 15 years. Her desire to see others succeed and her passion for sharing knowledge has earned her consistent recognition year after year as the leading Arabian Hunter Pleasure Trainer in the country.

2012 is the first year that Wendy Potts has been awarded the Vaughn Smith Trophy.

Voting is Now Open!
One of these eight award-winners will be honored as the overall 2012 USEF Equestrian of the Year. Now, it is up to you – USEF members and the USEF Board of Directors – to decide who will receive the top tribute for 2012.

Simply visit http://www.usef.org/_IFrames/eoty/ and type in your USEF membership number to access the voting portal. Voting will end at Midnight [ET] on Monday, January 7, 2013.