Home Horse News In Memoriam: Horses and Riders Lost in 2012

Whizzards Baby Doll (“Roxy”), March 15, 2001-February 8, 2012
Few horses achieve the sort of celebrity that Whizzards Baby Doll, better known as Roxy, earned both in the equestrian community and among non-equestrians. Roxy was the well-known and loved mount of reining trainer and clinician Stacy Westfall. Westfall rode Roxy bareback and bridleless to the Freestyle Reining Championship title at the 2006 All-American Quarter Horse Congress. A video of that ride went viral online, eventually catching the attention of daytime talk show host Ellen Degeneres, who aired the clip and brought the horse-and-rider pair to national attention. After Roxy’s retirement from competition, she continued to make appearances with Westfall, including a performance in the opening ceremonies of the 2010 Alltech FEI World Equestrian Games.
Read more >>

Amy Tryon, February 24, 1970-April 12, 2012
When three-day eventer Amy Tryon passed away in her sleep this spring, the loss was felt across the tight-knit eventing community. Tryon had been at the top of the sport for most of the first decade of the 2000s. With her American-bred Thoroughbred, Poggio II, she was part of the U.S. Olympic team that brought home bronze from the 2004 Olympics and competed in the 2008 Olympics. The pair also had a team gold medal from the 2002 World Equestrian Games and an individual bronze from the 2006 Olympics. Tryon was known for her work ethic, juggling her international-level riding career with a full-time job as a paramedic and firefighter in her home of Duvall, Washington until 2006.
Read more >>

Gills Bay Boy (“Scamper”) 1977-July 4, 2012
One of the most famous horses in the sport of barrel racing, Scamper, passed away this year at the remarkable age of 35. With his lifelong owner and trainer, Charmayne James, Scamper was unbeatable; the pair won National Finals Rodeo titles in 1984, 1986, 1987, 1989, and 1993 as well as 10 world’s championships in the Women’s Professional Rodeo Association. Scamper and James began winning championships when James was still a teenager, and their record made her the first million-dollar rider in the sport of barrel racing. Although Scamper was a gelding and had no offspring, his genes continue on through his ungelded clone, Clayton, who is owned by James and standing at stud.
Read more >>

VDL Ulando H, 2001-May 25, 2012; Icarus, 1998-May 26, 2012; Jude’s Law, 2001-May 27, 2012
Three eventing horses from Nathalie and Michael Pollard’s stable were lost when their trailer overturned in a traffic accident just five miles away from home in Georgia. Ulando was a Dutch-bred stallion owned by Ruth Armstrong of Ontario who trained and competed him for several years before bringing him to the Pollards. Icarus, a 14-year-old off-the-track Thoroughbred, was one of Michael’s top mounts, having competed at the four-star level. Irish Sport Horse Jude’s Law was a successful advanced-level eventer and a prospect for the 2012 Olympic team at the time of the accident.
Read more >>

Jonathan Wentz (November 15, 1990-September 30, 2012)
One of para-equestrian’s rising stars, Jonathan Wentz was just reaching the top of his game when he passed away unexpectedly this fall. Wentz began his equestrian career in therapeutic riding as a toddler, but moved on to dressage, eventually training with Kai Handt at the North Texas Equestrian Center. Handt paired him up with a Shire-cross gelding, NTEC Richter Scale, and together the pair earned a spot on the para-dressage team for the 2010 Alltech FEI World Equestrian Games. The following year, they won the 2011 National Championship for Grade 1b. In 2012, Wentz, a senior at Southern Methodist University, achieved his longtime goal of competing in the Paralympics where he was the top-finishing American, placing fourth in Grade 1b. Richter Scale has been nominated for USEF Horse of the Year, and Wentz was posthumously named one of this year’s USEF Equestrians of Honor and is a contender for Equestrian of the Year.
Read more >> 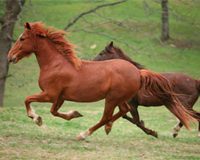 Regenerative Therapies May Aid Healing in Tendon and Ligament Injuries