Great Britain continues its Paralympic dominance after the team dressage tests
September 1 , 2012 – Team medals will be awarded after the individual championship tests on Saturday.
Read more >>

Great Britain takes the lead after day one of Paralympic equestrian
August 31 , 2012 – The host country of this year’s Paralympic Games has been a dominant force in the sport since its inception.
Read more >>

Great Britain wins Olympic gold in team dressage
August 7 , 2012 – The host country of this year’s games had never won a dressage medal, but ended that record in a big way today.
Read more >>

British riders are in first and second position after day one of Olympic dressage competition
August 2, 2012 – Jan Ebeling and Rafalca were the first Americans on the dressage stage; the remaining riders will compete tomorrow.
Read more >>

Japan’s Yoshiaki Oiwa takes the lead after the dressage phase of Olympic eventing
July 29, 2012 – There’s a shake up on the individual leaderboard at the end of day two, but few surprises on the team standings.
Read more >>

Get to know the United States Olympic Show Jumping Team
July 26, 2012 – Three seasoned competitors and one newcomer make up this year’s gold-medal hopefuls from the U.S.
Read more >>

Meet the United States Olympic Dressage Team
July 25, 2012 – These four riders will go up against the best in the world beginning on August 2.
Read more >>

FEI looks back at 100 years of equestrian in the Olympics
July 5, 2012 – The international organization has launched a new section of its website with facts and photos from a century of Olympic equestrianism. Read more >>

U.S. Eventing Team announced for 2012 Olympics
July 3, 2012 – Five horse-and-rider pairs made the cut and will compete later this month in London. Read more >>

USEF announces nominated entries for dressage and show jumping
June 18, 2012 – The horse-and-rider teams that made the cut will travel to England to continue training before the Olympics. Read more >>

Steffen Peters and Legolas 92 in the lead after first Olympic selection trials
June 10, 2012 – The veteran rider and his up-and-coming Grand Prix mount took the lead at the Grand Prix National Championship.
Read more >>

Dressage champs Steffen Peters and Ravel will sit out Olympic trials
June 1, 2012 – Thanks to the pair’s stellar performance record, the selectors will consider them for the short list even without participating in the trials.
Read more >>

Equestrian athletes are part of the London Olympics 100-day countdown in New York
April 18, 2012 – Three world-class riders and one world-class horse will join other athletes to celebrate in Times Square.
Read more >>

“Show Your Best” contest offers a chance to attend the 2012 London Olympics
March 28, 2012 – Submit a video of your personal best and you and your horse might be seen in a global TV spot for this year’s Olympics.
Read more >>

Japanese dressage rider Hiroshi Hoketsu could be oldest athlete at 2012 Olympics
March 9, 2012 – The Olympic veteran has qualified for the London games, where he will be 71 years old.
Read more >>

FEI celebrates 100 years of Olympic equestrianism
February 23, 2012 – Equestrian was first included as an Olympic sport at the 1912 games in Stockholm, Sweden.
Read more >>

Tickets for 2012 London Olympics Go on Sale This Week
March 14, 2011 – The equestrian events will be held in Greenwich Park between July 28 and August 9.
Read more >>

Greenwich Park Officially Named as Site of 2012 Olympic Equestrian Events
March 25, 2010 – The planning committee has made the decision to use the historic park despite vocal opposition.
Read more >> 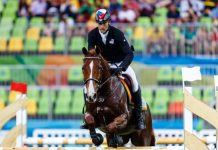