Equestrian sports are among the few athletic activities in which men and women compete against each other as equals. But for five years at the FTI Consulting Winter Equestrian Festival (WEF) in Wellington, Fla., the women have proven to be the dominant show jumping force in the Nespresso Battle of the Sexes.

Teams for this spectator-favorite event include Olympic veterans as well as up-and-coming show jumping stars from the U.S. and around the world. This year’s team rosters:

In the final round, the competition started at 1.60m (5’3″) and was increased to 1.80m (5’11”) over three rounds. Four riders from each team competed in this final phase. Nick Skelton, a member of the British show jumping team that won gold at last summer’s Olympics, was the only member of the men’s team to make the final round, joining Candice King and Georgina Bloomberg. All three riders went clear and opted not to continue. With two points awarded per clear round, that was enough for the women to pull a narrow victory over the men.

The Battle of the Sexes was introduced at the WEF in 2009, and the women have been victorious every year since. The Saturday evening event draws a near-capacity crowd to the Palm Beach International Equestrian Center. This year’s tally was said to be over 3,500 spectators in the stands for this opening night of the 2013 WEF, which continues through April 3. For more information, visit www.equestriansport.com. To watch video from this year’s Nespresso Battle of the Sexes, visit USEFNetwork.com. 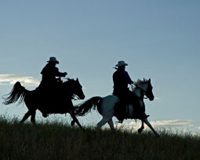