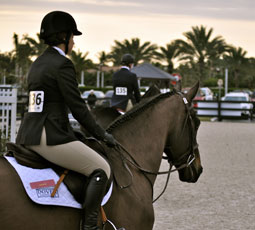 The mission of the CPI is to prepare and educate student riders in grades 8 – 12 about the format of college equestrian competition, encourage academics and horsemanship, and to provide the riders with resources to create their desired college equestrian experience.

Along with the fantastic CPI competition, the event will offer seminars and question & answer sessions during the show. Riders and their families will hear about the college equestrian experience and familiarize themselves with the different associations that govern collegiate riding. Those will include presentations from Robert Cacchione, Intercollegiate Horse Show Association (IHSA) Executive Director and Peter Cashman, IHSA Director at Large and United States Military Academy (USMA) Head Coach.

Special Presenters at the CPI

Ellen White
Ellen White, Head Coach at Baylor University, will introduce the National Collegiate Equestrian Association (formerly NCAA). White has been Baylor’s head equestrian coach for seven seasons. She has led the program to six straight Varsity Equestrian National Championship appearances, including a third place overall finish in 2012. As the Hunter Seat coach, she coached the team to the 2012 National title after finishing third in 2011, its previous best finish. White, an internationally recognized dressage trainer, was selected as the first head coach in the history of Baylor’s women’s equestrian program in 2005.

White joined the Baylor staff from Waco’s Willow Spring Farm, which she has owned and managed for the past 25 years. White also serves as an instructor for the American Pony Club Association & Junior Young Rider throughout the Lone Star state.

Still training with internationally known clinicians and Olympians, White was awarded U.S. Dressage Federation silver (1992) and gold (1999) medals, captured Selle Francais Horse of the Year honors three times (1992, 1993 and 1994) and won USDF Horse of the Year honors in 1993. White received qualifying scores for the U.S. Olympic Festival and Pan American Games, and she also was invited to qualify for the U.S. Olympic team in dressage.

Merrilee Wroten
Merrilee “Mimi” Wroten is the director of the riding program at Sweet Briar College and will be introducing American National Riding Commission (ANRC) at the 2013 CPI. Wroten is a USEF ‘R’ judge, an ANRC recorded judge and holds the ANRC top rider rating. She enjoys teaching and training riders of all levels and coaches successfully at home and away competitions. While at Sweet Briar, she has coached the ANRC team, the IHSA team, the Field team, and the Hunter show team.

In 2012, Wroten coached the Championship Old Dominion Athletic Conference(ODAC) Equestrian team, while at the same time being voted the 2012 ODAC coach of the year. In 2010 Mimi was awarded the Professional service award for the American National Riding Commission(ANRC).

Janet Harms
Harms is the Director of Dressage at The University of Findlay (UF) and will be introducing the Intercollegiate Dressage Association to the CPI competitors. Harms has been the head Dressage instructor and head coach of the IDA team at UF for the past ten years.

Harms grew up on a farm, and has been riding horses and ponies from the time she was three. Upon graduation from high school, Harms worked at Friendship Farm, an Arabian horse farm in Moline, IL, while attending college. An opportunity to become part of Friendship Farm’s Carriage Horse Division presented itself and for the next eight years, Harms learned the sport of competitive driving. All of the carriage horses had to be ridden, which is where the passion for Dressage entered the picture.

Harms took lessons from Betsy and Uwe Steiner who were the farm’s Dressage trainers. When the carriage division closed, Harms was offered a position as assistant trainer to Betsy Steiner. After eight years, Harms opened her own facility, Emerald Hills Equestrian Facility in northwestern Illinois.

Harms has competed through I-2, and has had the opportunity to train and compete many different types of horses. Harms taught Intermediate and Advanced riding lessons at Kirkwood College in Cedar Rapids, Iowa. She then applied and was hired at The University of Findlay to teach basic Dressage skills to students and to coach the Intercollegiate Team.

Dr. Karin Bump, PAS, PhD, is a professor of Equine Business Management at Cazenovia College as well as Director of the National Association of Equine Affiliated Academics. She has been involved in the equine industry since her youth and been employed in leadership roles within the field of equine academic offerings for the past 24 years. As part of her research interests, Dr. Bump has traveled the country visiting colleges and universities and, together with her husband and business partner Tim Williams, developed a national database of undergraduate educational offerings in the equine discipline.

Dr. Bump is active in a variety of industry and professional organizations including: Founder and Director of the National Association of Equine Affiliated Academics, Board of Directors for the Equine Science Society, NY Equine Committee liaison to the American Farm Bureau Federation and Chair of the New York Farm Bureau Equine Committee, and founding member of the New York Equine Leaders. She is certified as a Professional Animal Scientist through the American Registry of Professional Animal Scientists, holds a Master’s Degree from the University of Illinois and a PhD from the University of Albany.

Randi Heathman
Randi Heathman’s presentation will summarize the equestrian opportunities that students have available to them in college and walk them through the college search and application process while keeping their equestrian goals in mind.

Randi C. Heathman is an independent educational consultant whose decade of experience in higher education and lifetime involvement in equestrian sports give her a unique foundation from which to assist families. Heathman holds a B.A. in English and an M.A. in communication studies. She honed her craft as senior assistant director of admission at Albion College while also working extensively with their equestrian teams and equestrian program from its creation in 2004. She is an associate member of the Independent Educational Consultants Association (IECA), a member of the National Association for College Admission Counseling (NACAC), and travels to many college campuses, educational workshops, and equestrian college fairs each year so that she can best assist students in finding their right-fit school.

A lifelong horsewoman, Heathman is a member of the United States Equestrian Federation (USEF) and the United States Dressage Federation (USDF). Growing up, she competed in a variety of disciplines before concentrating her efforts on dressage. In 2009, she and her Dutch Warmblood gelding Ricochet were named GAIG/USDF Regional Champions at second level in the adult amateur division. She is also a USDF bronze medalist. 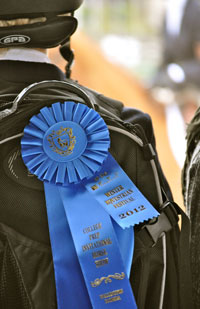 CPI College Expo – Meet College and University Representatives!
The expanded CPI College Expo will take place in conjunction with the CPI competition and seminars. The College Expo offers a two-day opportunity to all college-bound riders and their families to attend the CPI to explore all of their collegiate riding and scholarship opportunities even if they are not entered to compete.

Representatives from colleges and universities with equestrian teams and programs will be on hand to talk with any and all potential student riders and their families. Even if you aren’t riding in the CPI, anyone is invited to attend. The expo will be a great opportunity to meet many of the top equestrian schools all in one place.

The CPI also offers many great scholarships to it participants. Thanks to Charles Owen, the 2013 CPI has doubled the amount of money for its High Point Rider Scholarships. The scholarships will award $2,000 each to the High Point Hunt Seat Equitation Rider and the High Point Dressage Rider. The Essay Award, Champion of Service Award and Written Horsemanship Test will all award $1,500, and the eight Photo Journalist Awards will now award $100 to each winner. CPI will also feature the opportunity of three $1,500 scholarships to high school seniors who participate in the 2013 CPI and enroll at the Virginia Intermont College.